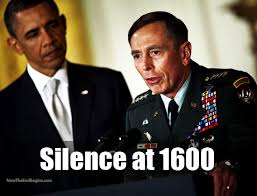 According to two well-vetted sources with intimate knowledge of the CIA operations and events in Benghazi, the resignation of CIA Director David Petraeus is directly related to the testimony he was expected to provide before a closed-door hearing next week before the Senate Intelligence Committee. Sources close to the controversy, citing the need for anonymity due to their positions, stated that Barack Hussein Obama was aware of the CIA director’s indiscretions “long before” the November 6, 2012 elections, and knew about the FBI’s investigative findings weeks before the election, but “erected a firewall” to prevent any disclosure before November 6th.

“What I do know is that an integral part of that firewall involved having information on Petraeus that would potentially damage his career, legacy and marriage. A sort of political blackmail, if you will. What I don’t know, but suspect, is that Petraeus was placed in the unenviable but self-inflicted position of having to choose between providing truthful testimony under oath and having his professional and personal life destroyed while systematically being impeached due to this incident, or keeping quiet before the Senate Intelligence Committee,” stated one source.

A second intelligence source stated that “the announcement [of Petraeus’ resignation] was carefully timed. It was announced in a Friday afternoon news dump three days after the election, and days before the Senate Intelligence Committee was to hear his testimony, despite the President having knowledge of these events weeks ago. Friday’s announcement served two purposes; it kept controversy from emerging before the election, while allowing the administration to buy time regarding testimony by a federalofficial about CIA’s involvement in Benghazi.”