Eyes of the Hammer (The Green Berets Book 1) Kindle Edition 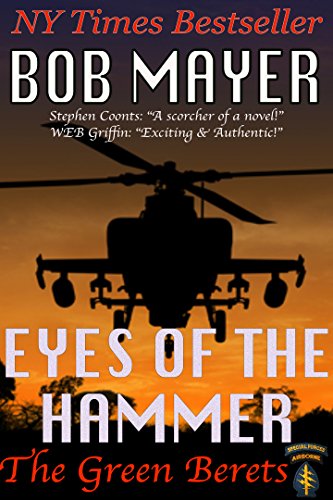 The Green Beret series: Over 1 Million Sold. Eyes of the Hammer by NY Times Bestselling Author, former Green Beret and West Point Graduate, Bob Mayer, is “Exciting and authentic! Author Mayer, a Green Beret himself, gave me a vivid look at the world of the Army’s Special Forces. His portrayal of Green Beret operations and techniques takes you deep into the world of Special Operations.” W.E.B. Griffin.

A US Special Forces team lead by Green Beret Dave Riley is on a top secret mission to take down drug traffickers in Colombia, but while doing so they are faced with betrayal by their own government.

The team is carrying sterilized weapons and unmarked uniforms and the operation is “off the books.”

Of course, nothing is as it seems, especially once the CIA gets involved. Throw in an Israeli mercenary and betrayal, and Dave Riley and his team soon find themselves wondering what the real mission is and will they become collateral damage from all the double-dealing going on back in Washington.

Eyes of the Hammer is the first book in the bestselling Green Beret Series written by a bestselling author who has “been there, done that.”