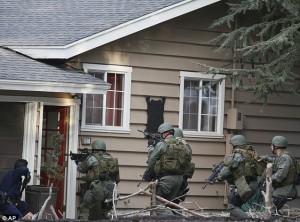 So, we spend a lot of time preparing for SHTF, or a full collapse. In the meantime, we live in an increasingly strict police state, a soft tyranny, on a trajectory towards hardening tyranny. It is not so far-fetched to envisage a time where SWAT raids will be entirely politically motivated. Therefore you may no longer be a ‘law-abiding citizen’, simply due to non-adherence to unjust laws, but you are certainly not a criminal in any real sense of the word. It is to that situation that this blog post is addressed, where good citizens are targeted by criminal raids under the color of unjust law, or politically motivated false accusations of terrorism..

Let’s assume something went down at your house. Your family is okay, but you returned fire and took down some bad guys. You grab your weapons and your gear and made it out the back. Now you’re into the E&E game. I talked a little bit about this in my post on the ‘Home Invasion Dilemma‘. There are certainly a couple of issues here: there is the issue that I will concentrate on this post which is the PR battle. There is also the issue of where you go. The question of where to E&E to depends on if you have any kind of network or alternative location which you can make your way to.

Now you are Dorner, whether you like it or not. You are a hunted fugitive. Your reputation is being trampled by the media. First you have to try and survive and escape, secondly you will want to try and salvage your reputation.

This entry was posted in Editorial and tagged Max Velocity. Bookmark the permalink.