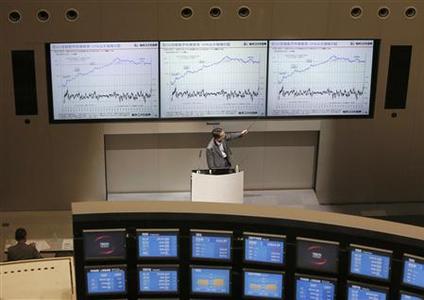 World stocks were pummeled and the dollar slumped on Thursday as a sell-off on global financial markets in thrall to central bank stimulus accelerated.

European shares .FTEU3 fell sharply in morning trading, dropping 1.3 percent after the second biggest fall in Japan’s Nikkei .N225 in over two years left Asian shares at their lowest level of the year. <.

Heavy selling hit the dollar, which slumped 2 percent against the yen as investors spooked by the plummeting Japanese stock market unwound hedges. It fell as low as 93.90 yen, its lowest since April 4, giving back almost all the gains made since the Bank of Japan’s aggressive monetary easing announced on that day.

The U.S. currency dropped to a 3-1/2 month low against the euro before a slight rebound left the common currency buying $1.3350.

The rout has been triggered by noises from the U.S. Federal Reserve, which meets next Tuesday and Wednesday, feeding into feverish uncertainty about the scaling back of its huge asset purchase program.

“The trend is still in principle a sell-off in markets, a sell-off in riskier assets on the expectations that the Fed might signal further readiness to maybe slow down the rate of purchases,” said Daiwa Securities economist Tobias Blattner.

This entry was posted in Editorial, Financial and tagged Nikkei, Selloff, Stock Market. Bookmark the permalink.