Is Hillary Clinton Worse than Madelaine Albright When Dealing with North Korea? Can You Say EMP? 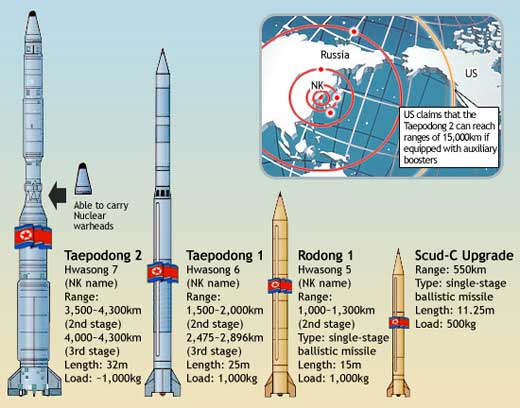 Under the US-North Korean agreement in March, 2012, the United States would give 240,000 metric tons of food to North Korea in exchange for freezing their nuclear and missile tests. How long did this agreement last? About as long as it took for the North Korean regime to stop laughing at the Obama regime’s incompetence after the Madelaine Albright debacle. And yet both Clinton and Biden had the audacity to criticize Romney’s lack of foreign relation experience this week:

In separate interviews, Vice President Joe Biden and Secretary of State Hillary Clinton sought to cast Romney as stuck in the days of the Cold War and unaware of the strategic interests that the United States and Russia share on Iran, Afghanistan and the world’s oil supply.

With the announcement today that North Korea will shortly unveil a missile capable of striking the continental US from North Korea, the scenario of an EMP attack on our country just exploded: literally. The Department of Homeland Security is granting “unlawful presence waivers” to illegal aliens in the United States as their strategy to secure the nation. Will DHS use the newly ordered 450 million rounds of hollow point 40 caliber to shoot  missiles out of the sky? The founding fathers were adamant against a large standing military and advocated strong state militias to secure our freedom from tyranny. But we now have a large standing military charged with protecting the country and Constitution. We have to wonder what their next step will be to protect our security from what could be total annihilation as outlined in “One Second After”.

There is a big difference between fear-mongering and reality. Reality is now upon us.

North Korea is preparing to unveil a new long-range missile that is capable of striking targets in the continental US.

Analysts estimate the weapon to be around 130 feet long and, equipped with a more powerful booster unit, capable of delivering a warhead more than 6,200 miles.

Unveiling the missile will raise new fears in neighbouring countries, already alarmed by Pyongyang’s insistence that it will go ahead with the launch in mid-April of a rocket to put a satellite into orbit.

Washington, Seoul and Tokyo believe the launch is a covert test launch of a missile.

Analysis of the rocket, which is being prepared for launch at the new Tongchang-ri aerospace facility in the far north-west of the country, indicates that at 105 feet long it is identical in length to the Taepodong-2 missile that was fired in April 2009 and, with a range of 4,163 miles, is the most potent missile in the North Korean armoury at present.

North Korea’s agreement to halt portions of its nuclear and missile programs and accept the return of nuclear inspectors is a “modest step in the right direction,” U.S. Secretary of State Hillary Clinton said Friday [March 9, 2012].

Clinton said, however, that the United States will be watching North Korea closely and judging the country’s leaders by their actions in the coming weeks and months.

North Korea last week announced it would freeze its nuclear and missile tests, along with uranium enrichment programs, and allow the return of U.N. nuclear inspectors in exchange for 240,000 metric tons of food aid from the United States.