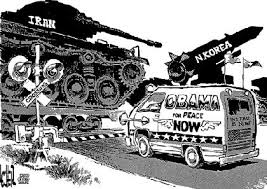 Angrily responding to the United Nations Security Council’s unanimous decision to impose tightened sanctions, North Korea said on Friday that it was nullifying all nonaggression agreements with South Korea, with one of its top generals claiming that his country had nuclear-tipped intercontinental ballistic missiles ready to blast off.

Matching the harsh warning with a toughened stance, South Korea said on Friday that if Pyongyang attacks the South with a nuclear weapon, the regime of the North Korean leader Kim Jong-un, “will be erased from the earth.”

While weapons experts say North Korea does not have the technical capability to use nuclear-tipped missiles, that did not stop it from warning of their deployment.

“With their targets set, our intercontinental ballistic missiles and other missiles are on a standby, loaded with lighter, smaller and diversified nuclear warheads,” said Kang Pyo-yong, a three-star general and vice defense minister of North Korea. “If we push the button, they will blast off and their barrage will turn Washington, the stronghold of American imperialists and the nest of evil, and its followers, into a sea of fire.”

WHITE HOUSE: US CAN DEFEND AGAINST NKOREA ATTACK