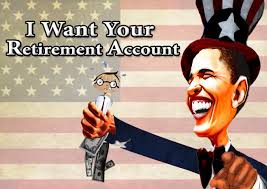 It may be time to take the tax hit and withdraw funds from private retirement accounts before they are forced into long term T-bonds.

The Obama administration is reportedly quickly moving on plans to nationalize private 401k and IRA retirement accounts, and replace them with government sponsored annuities(aka Treasury bonds that the Treasury currently can’t sell to anyone but the Fed).

National Seniors Council Director Robert Crone warns: “This whole issue is moving forward very quickly.  Already there is a bill requiring all businesses to automatically enroll their employees in IRA plans in which part of every employee’s paycheck would be automatically deducted and deposited into this account. If this passes, the government will be just one step away from being able to confiscate all these retirement accounts.“

All your retirement savings are belong to us:

A recent hearing sponsored by the Treasury and Labor Departments marked the beginning of the Obama Administration’s effort to nationalize the nation’s pension system and to eliminate private retirement accounts including IRA’s and 401k plans, NSC is warning.

Portugal Confiscates Private Pension Funds – Can It Happen in the United States?

This entry was posted in Editorial, Financial and tagged 401K, Confiscate, IRA, Obama. Bookmark the permalink.