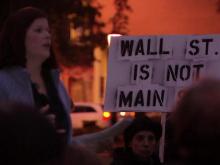 WRAL is reporting on two Occupy [Insert City] protests in North Carolina. The video states several dozen protesters showed up in Raleigh but in the article, they state “hundreds of people gathered”.  Two points:

1. We get the government we deserve. Rep. Brad Miller (D) was one of the protesters tonight as shown in his interview. The people in the 13th district of North Carolina should hide their heads in shame.

2. WRAL covered this event but did not cover the protest at the Governor’s mansion concerning Beverly Perdue’s assertion to suspend Congressional elections in violation of the US Constitution.

If these protests succeed in their purpose, American will enter a civil war or a dictatorship.

Hundreds of people gathered in downtown Raleigh and Durham on Sunday to show
solidarity with an ongoing protest against corporate greed and social inequality
on Wall Street.

The Occupy Wall Street movement started with just a dozen college students
three weeks ago, but has spread across the nation despite a lack of clear
leadership and concrete proposals to fix the ailing economy. The protesters
themselves, however, say the gatherings are a way to express mounting
frustration about lopsided distributions of money and power in the United
States.

Tanya Glover attended the Occupy Raleigh protest at Moore Square Sunday
evening. She said she feels like the American people are getting “dumped on” by
corporations and Congress.

She said not matter what she does or how hard she works, she continues to get
poorer while the rich get richer.

“I’ve never done anything like this before and I don’t know everything that’s
going on and I don’t pretend to understand it all. I know that I get up every
morning and I bust my butt to take care of my family and I’m getting nowhere,”
Glover said.

Rep. Brad Miller, a Democrat who represents the state’s 13th District, which
includes Raleigh, came to listen to protesters’ concerns. He said it’s a
question of injustice.

“The people who caused the financial crisis (and) the painful recession that
we’ve been through seem to have gotten off scot-free,” Miller said. “The people
who did suffer were really without blame, and that offends people.”