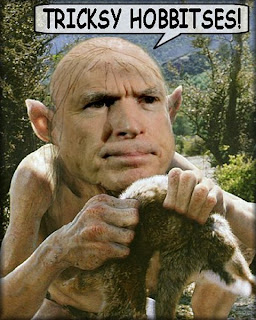 The labelling of the Tea Party as hobbits continues as shown in the following excerpt from the Wall Street Journal:

The debt-limit hobbits should also realize that at this point the Washington fracas they are prolonging isn’t helping their cause. Republicans are not looking like adults to whom voters can entrust the government.

I was asked recently what title I would like used to introduce me for an upcoming event. My response never waivers when I am asked this question: patriot. Editor is also fine but labels and titles are used today to marginalize our positions. The left resorts to the “racist” label and now the right resorts to the “hobbit” label.

Thinking about the Shire as written by Tolkien reminds me of an idyllic life where the events of the outside world has no impact on me. Life is good and everyone is happily oblivious to the approaching evil. This sounds like America in the 1950s. How did that work out for the hobbits? In the end, the evil overtook the Shire and tyranny ruled until a few hobbits (experienced patriots), stood up for freedom. Were we warned about this?

“If ever a time should come, when vain and aspiring men shall possess the highest seats in Government, our country will be in need of its experienced patriots to prevent its ruin.”

So the American people are waking up to the truth: vain and aspiring men now possess the highest seat in Washington. When we speak up for our natural rights, we are marginalized by both political parties. The “hobbit” label is actually one that may suit us. America lost itself in apathy and an erosion of morality. We are now facing the impending economic collapse and this week, we sent a simple message to Washington: DO NOT RAISE THE DEBT CEILING. For this “arrogance”, we are labelled and attacked. Here is my response:

Some of us may fall, but we will be stronger for it.

What was the correct course of action concerning the debt ceiling? Which time? Consistently raising the debt ceiling does not solve the problem. The new Republican House of Representatives should have addressed this issue in late March. Postponing the issue by spending the federal employees’ pension fund showed America that Congress will NEVER address this issue.

I listened to the following video concerning Allen West’s view of the Boehner resolution:

Both versions (Thursday’s and Friday’s) would not pass in the Senate. What is the point of a “solution” that is guaranteed to fail? This is not a case of losing a battle to win a war. The clock is ticking, the debt ceiling must be raised to avoid an economic collapse and no solution to government spending to restore economic prosperity will be adopted while America capitulates to political rhetoric.

Unless some of the hobbits stand up like South Carolina.

3 Responses to The Debt-Limit Hobbits