Where Is the Bank of England’s Gold? 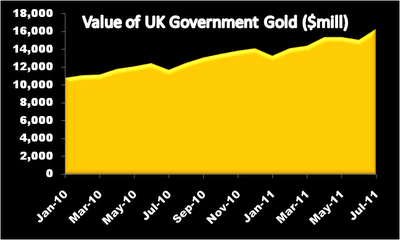 Venezuela will be nationalizing their country’s gold mines and repatriating their gold reserves which amount to $11 billion that are held in foreign banks:

Finance Minister Jorge Giordani said that the weakening U.S. dollar, a near-default by the U.S. government and the European sovereign debt crisis threaten Venezuela’s savings and they will be more secure at home and in “allied” countries.

Venezuela has 99 tons of their gold stored at the Bank of England which acts as the Her Majesty’s Treasury (HMT) agent for the nation’s gold reserves.

The United Kingdom’s Official Reserves of Foreign Currency and Gold

The United Kingdom’s official holdings of international reserves comprise gold, foreign currency assets, International Monetary Fund (IMF) Special Drawing Rights (SDRs), and the UK’s Reserve Tranche Position (RTP) at the IMF. With the exception of the RTP, these reserves are held in a government account administered by Her Majesty’s Treasury (HMT), the Exchange Equalisation Account (EEA). The Bank of England (the Bank) acts as HMT’s Agent in the day-to-day management of the EEA. The Bank deals in foreign exchange and invests the reserves within the framework of a Remit set by HMT.

So how much gold does England actually have? The following statement from the Bank of England implies that they have 320 tons of gold. If this is true, Venezuela’s share represents 30.9% of their reserves.  The graph above shows their gold reserves to be about 300 tons.

The United Kingdom’s Official Reserves of Foreign Currency and Gold

In May 1999, the Government announced a restructuring of the reserves involving a programme of gold sales by auction to achieve a better balance in the portfolio by increasing the proportion held in currency. Auctions of gold were held approximately bi-monthly between July 1999 and March 2002. Around 395 tonnes were sold by this means; the EEA’s holdings of gold at the start of the programme had been approximately 715 tonnes. Following each auction, the proceeds of the gold sales were invested in foreign currency interest-bearing assets and retained in the reserves broadly in the proportion 40% dollars, 40% euros and 20% yen. Further information on the gold sales programme is contained in HMT’s Review of the Sale of Part of the UK Gold Reserves (November 2002). The National Audit Office and the House of Commons Public Accounts Committee have also produced reports on the gold auction programme.4

4The EEA’s holdings of gold are published each month on the Bank of England website. See www.bankofengland.co.uk/mfsd/reserves/Tempoutput.pdf. The amount of gold held, and its current value, are shown at the top of page 4.

The footnote gives a link to the current amount of their gold holding and value: www.bankofengland.co.uk/mfsd/reserves/Tempoutput.pdf. Unfortunately this is not a valid link:

The page you have requested cannot be found at this location.

You could try using the Site Map to find what you are looking for, alternatively use the search at the top of this page.

If you have any problems finding what you need, please call our enquiries section on +44 (0)20 7601 4878, or email them at enquiries@bankofengland.co.uk.

Will Venezuela be the catalyst for the collapse of the English empire? Or will Venezuela be the catalyst for a global economic collapse? The timing of this action must be considered as well as the consequences since Venezuela is qualifying which countries are aligned with them as part of their statement. All of the information in this article assumes that the Bank of England actually has physical possession of their gold.

This entry was posted in Editorial, Financial and tagged Bank of England, Chavez, Gold, NC Renegade, Venezuela. Bookmark the permalink.

4 Responses to Where Is the Bank of England’s Gold?