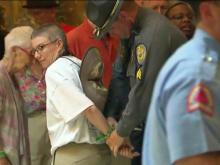 The first Moral Monday protesters arrested at the North Carolina General Assembly are set to appear in a Wake County courtroom and are expected to plead not guilty.

Among the 17 scheduled for a hearing Monday is NAACP North Carolina president Rev. William Barber, who was arrested April 29 on misdemeanor counts of second-degree trespassing, failure to disperse on command and violating building rules. Barber, 49, said he’ll appear in person.

Another five protesters, ages 21 to 24, from a May Day demonstration are also due in court, though they’re not being represented by NAACP lawyers.

More than 450 people have been arrested so far as part of what have become weekly Monday evening protests against the policies championed by Gov. Pat McCrory and the Republican-controlled legislature. Republicans seized the General Assembly in 2010, and with McCrory’s successful 2012 campaign, the GOP controls the legislative and executive branches simultaneously for the first time since 1870. Since taking control, Republicans have pushed a conservative makeover on economic, education and social policy that protesters call out of step with the electorate overall.

This entry was posted in Civil Unrest, Editorial. Bookmark the permalink.