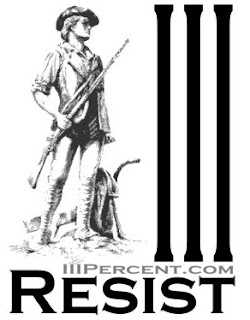 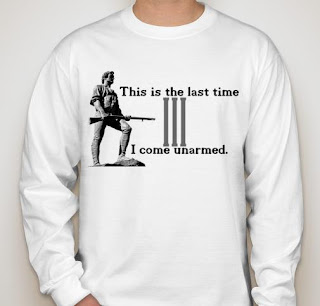 I am calling for a III Liberty Conference in Washington DC just days before the Election and the Buy a Gun Day.We are in this place of inaction rooted in indecision, in a time that requires direct, aggressive action to counter the efforts of the Enemies of Liberty.Calls for us to mix and mingle in OWS and similar steps are too little, too late.  Calls for us to engage in Secret Squirrel machinations are a stain upon the noble goal of Restoration of the Constitution, as ratified.We need to short circuit the process in a way that declares who we are, what we intend, and conveys our absolute commitment.  We need to stand up and be counted.

We will have Liberty or we will embrace Death.

I have decided to take point.  If you decide this is not for you, so be it.

I am a man of action.  I am a man who says what I mean, and I mean what I say.  When I see bullshit, I call bullshit.  Some of you saw a glimpse of that this weekend.  I have zero tolerance for people who use this struggle for Liberty for personal gain or aggrandizement.  Our community is among the smallest on the field.  I am a Constitutionalist.  That is my goal.  I will be part of Restoration of the Constitution, as ratified, or I will be dead.

It is what it is.

Friday November 2, 2012 I will have a hall rented for III Patriots to meet in private.

Saturday November 3, 2012 I will have a hall rented for III Patriots and advocates of Liberty in Washington DC.  We will walk boldly into the lair of the Enemy and look him in his eye and we will tell our enemies where we stand, what we intend, and what will happen if they do not immediately cease and desist in their abuse of the Constitution.

I will take point.  I will give that speech.  I will take the heat.  I will say things that will probably be sufficient to earn an indictment.

We will be free and at Liberty, or we will have a Ruckus.

What I ask of you, Patriots: I ask you III Patriots to join me.

Find a way to come to Washington DC for 2 days, ready to demand Liberty.

I ask only genuine III Patriots.  I ask that if you sincerely would stand on the Green with John Parker and his men, that you find a way to travel to DC on November 3 and stand with me in that hall, filled with Enemies of Liberty.  I will do what I can through the 527 to help defer as much expense as possible.

I spoke with Mark Roote at TL’s event and he sparked my brain.  I will ask 3 things of every Patriot who chooses to stand with me.

2) I ask that you wear a III Shirt (I will have them printed) that says: I am unarmed.  This is the last time I will ever arrive unarmed. Enemies of Liberty: You have been warned.

3) I ask that you wear an empty holster and an empty rifle sling in plain view.I will have a Keynote speaker from professional Washington: Pat Buchanan, Judge Napolitano, or some similar person who understands our position.Every III Patriot in attendence will be granted 5-10 minutes at the podium to speak his/her mind.I will have extensive MSM media on hand, print and television.

I will suggest that we all sign our names to a document that lists our train of abuses and parallels the original Declaration of Independence, and that after our statements, we march a few blocks to either Congress or the White House and deliver it as formal warning to our elected representatives.

I suggest that our ultimatum be simple, and we all sign our names to it as did John Hancock: We will have Freedom to live at Liberty, as defined by Mister Jefferson and enshrined in the DoI, Constitution and Bill of Rights, or when we disband and return to our separate AO’s, we will begin defending ourselves and our neighbors from unconstitutional acts of Government.

Patriots: I will be there, and I will do this.

I will do it alone, if I must.

I would prefer not to be alone.

If they mean to have a war, let them start with me.

I will support your movement with all my being. If we as Americans, especially those of us who have done this before, are not willing to lay our lives down for this great country now it will never happen. The doors to the great wall of submission to marxist, communist ideology are closing. And, we will be locked inside.