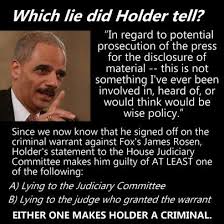 Attorney General Eric Holder defended his testimony before Congress, arguing that while a warrant to spy on a Fox News reporter’s emails sought “probable cause,” he was truthful when he told lawmakers there was never any intent to prosecute the journalist.

In a letter to House Judiciary Chairman Bob Goodlatte (R-Va.) released late Wednesday night, Holder expanded on the Justice Department’s justification for naming reporter James Rosen as a criminal co-conspirator in its investigation of a classified leak.

“In order to proceed under the Privacy Protection Act, the government was required to establish that there was probable cause to believe that the reporter had committed or was committing a criminal offense to which the needed materials related,” wrote Holder.

Holder, though, insisted that seeking the warrant to launch their leak probe did not signal any intent to criminally prosecute Rosen, calling it only an “investigative step.”

“Based on the facts establishing probable cause in the warrant application, a federal judge granted the warrant,” Holder continued. “As explained in our prior letters, the government’s decision to seek this search warrant was an investigative step, and at no time during this matter have prosecutors sought approval from me to bring criminal charges against the reporter.”

This is just not correct. He’s lying through his teeth. Even I know you must have probable cause to even think about wiretapping or searches. Holder should be arrested for this.