It’s Just a Piece of Paper

We’re supposed to revere – and follow – the Constitution. But if they don’t, why should we?  By they, I mean the people who lord it over us. Our rulers. I choose the word deliberately, in the interests of editorial accuracy. We’re certainly not ruled by the Constitution.

And neither are they. 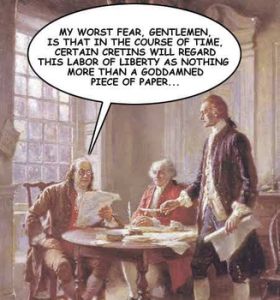 Consider, for instance, this business of judicial review. The power claimed by the Supreme Court to “interpret” the Constitution. It is a power you will find nowhere in the Constitution itself, or even hinted at. It was simply asserted by the first chief justice, John Marshall (who was a cousin of but also – unsurprisingly – a great enemy of Thomas Jefferson’s) in a kind of lawyerly Beer Hall Putsch. The court, under Marshall, defined and decreed its own power. It has been the final arbiter of what the Constitution “really” means ever since.

Even when the court’s interpretation is obviously at odds with the plain meaning of what is actually written in the Constitution.

This is the mechanism by which we are halted and searched randomly – the very definition of unreasonable, which is the language you will find in the Constitution. But the Court has repeatedly asserted its own fluid definition, Humpty Dumpty-style, contrary to what is written and simply because it can. The Fourth (and other amendments) mean whatever the Court says they mean, which means they mean nothing at all.

Here’s another:  The Constitution defines the president as a mere administrator. It is not his job (under the Constitution) to “create jobs” or start wars yet he does both (or tries to) as a matter of routine. So routine has this become that it’s now expected – even demanded – by the electorate.

Making war – and “creating jobs” – are two of the chief themes of modern presidential debates and the basis for judging the merits (the greatness) of a given president. Yet they have no lawful power to do either thing – under the Constitution.

Presidents are great to the extent they ignore the Constitution. Lincoln, Wilson, FDR. Whether you regard the actions of these men as meritorious is beside the point. Their actions were patently not constitutional.

Since the time of Lincoln, at least, American presidents have become elected monarchs, who rule to a great extent by a decree called the executive order, which is another thing you will find nowhere in the Constitution. It is another made-up power seized by those who wield power.

Perhaps you have noticed a pattern.

This power is being used more and more promiscuously – as recently by President Obama with regard to “controlling” guns (that is, controlling people who wish to exercise their right, which is in the Constitution, to keep and bear arms). The president was not able to get what he wanted through the constitutional legislative process, so he simply issued an executive order. It is the American version of a Fuhrerbefehl. That is, an order issued from the leader.

Below are my thoughts in the matter –

Those who claim absolute power in the name of the Federal Government, have absolutely no basis upon which to substantiate any such claim.  They will however, continue to make such claims, and to act upon them as though valid, unless and until free men rise up to correct their grave misunderstanding in the matter.

There is no liberty, and there can be no liberty, absent a populace of free men willing to take up arms to repel each and every tyranical act, with whatever quantity of force is necessary to halt the current offense, and also sufficiently violent to mollify any future aspirations to overstep the just bounds of the various elected offices, amongst which power tends to collect.

And as for the bureaucratic horde – there can be none.  Bureaucracy is as sure a poison to liberty as cyanide, and just as quick to kill those who resist such “bureaucratic authority” – witness Waco, Ruby Ridge, etc.