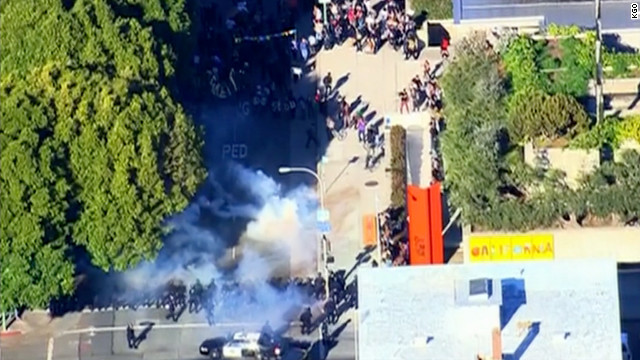 Just as George Soros predicted last week, the occupy movement is becoming violent and civil unrest will spread across the country.

Oakland has been a flash point of the Occupy movement since October when police used tear gas to break up demonstrators who refused to leave downtown. One demonstrator, a Marine veteran of the war in Iraq, suffered a skull fracture after being hit with a police projectile, according to a veteran’s group. Police said they acted after the crowd threw paint and other objects at officers.

On Saturday, police made mass arrests following an afternoon clash with protesters near the Kaiser Convention Center and then later outside a downtown YMCA, according to a police statement.

The tension began Saturday around noon when about 250 activists gathered in Frank Ogawa Plaza. They were joined later by another 200 people as they marched around the city.

Police said the protesters “began tearing down perimeter fences around” the Kaiser center around 2:30 p.m., with officers ordering the protesters to leave the area about 20 minutes later.

“The City of Oakland welcomes peaceful forms of assembly and freedom of speech, but acts of violence, property destruction and overnight lodging will not be tolerated,” the statement said.