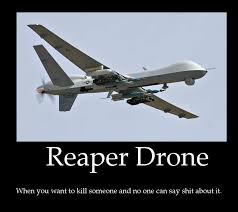 The U.S. is markedly widening its role in the stepped up French-led military campaign against extremists in Mali, providing sensitive intelligence that pinpoints militant targets for attack, U.S. and allied officials disclosed.

U.S. Reaper drones have provided intelligence and targeting information that have led to nearly 60 French airstrikes in the past week alone in a range of mountains the size of Britain, where Western intelligence agencies believe militant leaders are hiding, say French officials.

The operations target top militants, including Mokhtar Belmokhtar, the mastermind of January’s hostage raid on an Algerian natural gas plant that claimed the lives of at least 38 employees, including three Americans. Chad forces said they killed him on Saturday, a day after saying they had killed Abdelhamid Abou Zeid, the commander of al Qaeda in the Islamic Maghreb’s Mali wing.

French, U.S. and Malian officials have not confirmed the deaths of Mr. Belmokhtar or Mr. Zeid, citing a lack of definitive information from the field. But they say the new arrangement with the U.S. has led in recent days to a raised tempo in strikes against al Qaeda-linked groups and their allies some time after the offensive began in January. That is a shift for the U.S., which initially limited intelligence sharing that could pinpoint targets for French strikes.