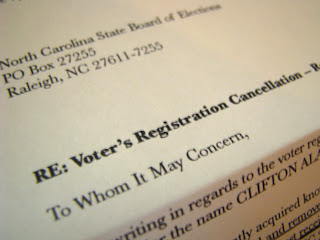 Back in June of 2010, I became a state citizen. A while back I learned of some shocking historical facts about our country. These facts tell me the following:

A person who votes or participates in more than one body politic is fraudulent and dishonest. So after much delay, today I am sending in an official cancellation letter, requesting that my voter’s registration through the North Carolina State Board of Elections be cancelled, and receipt of this cancellation be mailed to me in return. Even though I have not voted in that government in quite a while, and my loyalty to our Republic has for a long time been steadfast, this long overdue letter will be yet another firm legal indicator of my oath of citizenship. Here is the text of the letter.

To Whom It May Concern,

I am writing in regards to the voter registration currently listed in your system as account number xxxxxxxxxxx and listed under the name xxxxx xxxxx.

Based upon my recently acquired knowledge as detailed below, I would like to formally request that this voter registration account be cancelled and removed from your system, along with my name and any associated personal information. I would also like to request receipt and/or proof of cancellation and removal, in writing, to be mailed to xxxx xxxxxxx Rd., xxxxxxx, xx xxxxx.

Through a study of history, I recently discovered that there are two separate body politics currently operating within the territorial boundaries of the state of North Carolina. The first state called North Carolina entered the American Union as the 12th state on November 21, 1789. The second state called North Carolina purportedly entered as the 39th state on June 25, 1868. This second state (the seal of which is being used by your organization) entered the Union by military order (see attached “Military Order No. 120”). This was after Reconstruction. During this time, actions by the 39th Congress overthrew and in fact annulled that first state two years after the Civil War was over, and a full year after peace had already been declared. Contrary to what I was originally taught, I have learned the little known history that the object of the Civil War at the time, and according to the 37th Congress, was about defending and maintaining the “dignity, equality and rights of the several states unimpaired” (see attached “Congressional Globe: Object of the War”). However, it has become obvious to me that the original object of the war is at total opposition with its actual outcome! A brief overview of this sequence of events is as follows:

1865 & 1866 – North Carolina is considered back in the Union to the degree that they participate in the amending of the National Constitution abolishing slavery.

March 2, 1867 – With the Reconstruction Acts, Congress changes the object of the war two years after the war is over and one year after peace is declared.

Reconstruction also resulted in the 14th Amendment. I’ve discovered that this is the only congressionally coerced Amendment to the U.S. Constitution in our entire American history. Section five of the Reconstruction Acts stated that states would not be entitled to representation in Congress unless they first adopted the 14th Amendment AND only if the 14th Amendment became part of the Constitution of the United States. This nationalized citizenship, making all Americans subject to Washington, rather than to local self-government. With these facts and many others which I have learned, I must, from this point forward, truly consider the unconstitutionality of the Reconstruction Acts of 1867 and 1868, which purportedly put this new body politic into place which calls itself North Carolina. These blatant violations are numerous, and cannot be ignored:

Article 3, Section 3 of the Constitution states that “Treason against the United States, shall consist only in levying war against them, or in adhering to their enemies, giving them aid and comfort…” The 39th Congress’ defiance of the original object of the War was in fact a new war upon the States, our founding principles and the Constitution. Reconstruction and its maintenance, therefore is nothing less than statutized treason.

Article 1, Section 9 of the Constitution states that, “No Bill of Attainder or ex post facto Law shall be passed”. The constitution of every State also expressly forbids bills of attainder. A bill of attainder is an act of a legislature declaring a person or group of persons guilty of some crime and punishing them without benefit of a judicial trial. In total violation of this concept, section 5 of the first Reconstruction Act stated that all who participated in the rebellion were to be disfranchised.

Article 4 states, “The United States shall guarantee to every state in this union a republican form of government, and shall protect each of them against invasion;…” When Congress changed the body politic, putting the new state in place, this was NOT guaranteeing a republican form of government to the community of free citizens of the original state.

Article 5 of the Constitution states, “The Congress,…shall propose amendments to this Constitution,…provided that …no state, without its consent, shall be deprived of its equal suffrage in the Senate.” In contradiction to Article 5, the original state called North-Carolina was not allowed to vote in the U.S. Senate during the proposal of the 14th Amendment. The first Reconstruction Act, Section 5 says that a state would not be entitled to representation in Congress (which is what makes it a state), unless that state first adopted the 14th Amendment. This begs the question, if this original North-Carolina was not a state, then how could it pass an amendment?

The 5th Amendment makes these statements, “No person shall be held to answer for a capital, or otherwise infamous crime….nor be deprived of life, liberty, or property, without due process of law…” The Reconstruction Acts declared an entire body of people to be guilty; not allowing them to have their own form of government unless they first adopted the 14th Amendment. This is a total violation of the due process law that is represented in this 5th Amendment.

I have attached a copy of my Affidavit of Citizenship and Domicile, signed and sealed June 12th, 2010, which clearly shows my legal and lawful status as a citizen of the State of North-Carolina American Republic, the twelfth of the original thirteen states to enter the American Union, and as re-established on December 1, 1997.

According to your voting requirements as listed at the website located at http://www.sboe.state.nc.us, U.S. citizenship is a requirement that must be met in order for one to register and vote in your state. Due to the facts which I have stated, along with my actions taken to reclaim my original state citizenship status, it would appear that I no longer meet this requirement. Furthermore, due to these Constitutional violations which I have listed, I can find no lawful origin or past pedigree for your state or body politic. Therefore, I kindly request that my voter’s registration be cancelled, my name and any additional information removed from your system, and that receipt and/or proof of this removal be mailed to the address listed above.

I admire your courage and willingness “to do that which you know is right”.

Thanks Hans. I wish that more people would stop begging and start asserting. Around 56% of the voting-age population shows up at the poles. Even a larger percentage complies with everything the government asks of them. I’m guessing that maybe less than one percent of people challenge the system head on with non-compliance. Maybe it’s more, who knows. What if those percentages were reversed? How much more in control would “We the People” have if firstly, we desired to be a moral and responsible people, and secondly, if the majority (or even a slightly larger minority) resisted everything but laws which were Constitutional? I think our movement suffers from pessimism and defeatism. We have forgotten that God moves mountains.

Did this successfully remove you and did you get anything back from them? I live in North Carolina and would like to do the same.

Yes, this did remove me. Just 6 days later, I received confirmation that my certified notice had been received by Administrative Assistant Steve Simos. Then just a few days later I received written notice and a stamped copy of my letter indicating that on June 21st, 2011, “your name has been removed and you will no longer be able to vote in County of Forsyth.”

Thanks, I’m going to give it a try.

Very good, John. If you are interested in reclaiming your state citizenship status, and having a body who is able to help you assert your rights, we would very much enjoy your participation in our de jure state. We will meet this Saturday in Mooresville.