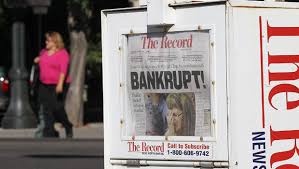 In Stockton, Calif., which has just entered into Chapter 9 bankruptcy, 41 percent of the people do not speak English at home and 21 percent cannot speak it very well, according to the U.S. Census Bureau.

Data that the Census Bureau developed on what it calls the “social characteristics” of Stockton during the five-year period from 2007 to 2011, indicate that this city, located eighty miles east of San Francisco in California’s San Joaquin Valley, had a population of 289,926.

Looking at the subset of Stockton’s population that was five years old or older (264,713), the Census Bureau estimated there were 119,991 people who did not speak English at home. These 119,991 people equaled about 41 percent of Stockton’s overall population of 289,926 people and about 45 percent of the 264,713 people in the city who were five years old or older.

This entry was posted in Editorial, Immigration and tagged Bankrupt, Immigration, Stockton. Bookmark the permalink.