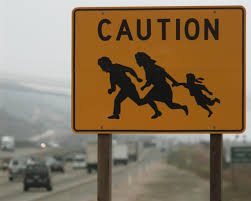 The ACLU of North Carolina delivered a petition with more than 22,000 signatures to Gov. Pat McCrory yesterday that urges him to support issuing licenses to illegal aliens.

Just because we can give illegal aliens a NC driver’s license, doesn’t mean we should. It is not illegal to deny them one and many states do not.

A NC drivers’ license is a privilege reserved for law abiding NC residents, not a right guaranteed to law breaking illegal aliens.

A NC drivers’ license confers a “quasi” legal status to illegal aliens and is the most critical document needed to register to vote. The rest are easily forged or stolen (ie: birth certificates, social security cards, etc)

We urge you contact the following people and say “NO to licenses for illegals”!

Your Senator- http://ncleg.net/gascripts/members/memberList.pl?sChamber=senate                   (click on members’ name for email address)

We must let our leaders know that more people do NOT want them to issue licenses, than the number of people that DO. The loudest people get most of their attention. Right now there is a very VOCAL MINORITY that is getting their attention and they say YES issue licenses to illegal aliens and/or their children. We MUST tell them NO.

I used to be very sympathetic to the ‘anti-illegal’ arguments. But somewhere over the past few years as I have awakened from my mind controlled slumber, my views on the subject changed. Sometimes we get drawn into fighting the wrong battles. Consider …

If I am a sovereign human being, why can I not choose to live wherever I wish without being harassed by people in costumes who serve the state; not the people, THE STATE. Why do I need a Passport? Could it be because all slaves need the written permission of the slave owner to leave the plantation?

Why am I forced to live in a ‘multicultural’ society where freedom of association is restricted and property rights voided. Allow me to elaborate. If I own my own home and decide to sell it, why am I forced to sell it to just anyone who has the money to purchase it? Why can’t I make the decision to sell MY home to someone who ‘fits’ in the community; someone of the same religious, cultural, and political persuasions as the community? THAT’S WHAT MAKES A COMMUNITY -- “a group or class having common interests; similarity or identity”.

If I truly own my property, I should have the right to sell it, or not sell it, to whomever I want. If I’m a sovereign human being, I should have the right to associate or not associate with whomever I wish. People being people, most would choose to associate with others of the same cultural, political, and religious persuasion as themselves. The whole ‘race’ thing is just a straw man argument to implement multiculturalism, at least for the vast majority of us.

The truth is, there is only one race, the human race. Legislating morality for the few true racists never works and forcing people from different cultures to live in close proximity makes everyone uncomfortable and sows division. And where is the benefit to it, anyway? I’ll tell you who benefits. The Powers That Be benefit by keeping all of us at each others throats while they rape and pillage us. Remember ‘divide and conquer’?

If we still had a common culture here in America, then when someone from ‘south of the border’ came here to live, they would, by necessity, have to fall into the melting pot and assimilate into that culture. They would then be welcome in my neighborhood and as my coworker. In that case I see absolutely no need for them to be required to jump through any arbitrary hoops like getting a work visa, a green card, or a drivers license. Think of it. No border patrol or ICE. No goons in costumes abusing the natural law rights of sovereign human beings.

Rather than spending so much energy attempting to deny illegals a drivers license, why aren’t we asking why ANY of us should be required to have one. Ask yourself:

1) If I am (or the ‘illegal’ is) a sovereign human being, and if national boundaries are artificial and invisible lines drawn up to divide people, why can’t I or the ‘illegal’ travel on the ‘public way’ without interference so long as we do no harm to others as we travel; regardless of the invisible boundaries?

2) Under common law I have a RIGHT to travel the ‘public way’. That right is NOT a privilege. It is a RIGHT. The argument that the roads have to be constructed and maintained and that people must be licensed to use them is a farce. Anyone (including illegals) using the public highways pays for that construction and maintenance by way of the gasoline taxes levied toward that end. Requiring a license is the same as asking permission. I need NO permission to exercise a RIGHT.
So, I’d be much more interested in supporting the revocation of ALL licensing laws restricting our natural law rights to travel the public way than to drag others into such a scam.

Like I said earlier, sometimes we get drawn into fighting the wrong battles. I’d prefer that we regroup and redirect our efforts toward the true enemy. That true enemy is not a Mexican or a Guatemalan. That enemy is the STATE. It is the STATE as it currently exists that is in the process of destroying the true American culture. Once it succeeds, I don’t think it will matter who is required to ask permission to travel the public way.