ACTION ALERT-HB786-Licenses for illegals in NC 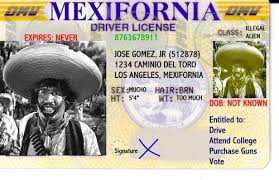 It’s official……. North Carolina House Republicans have introduced legislation today in the state General Assembly to give all illegal immigrants in North Carolina a driver’s license. The Bill is HB786. They are calling it a driver’s permit, but outside of not being able to vote with it, it is in fact a driver’s license. They also have added language in this bill that seems to gut the earlier E-Verify bill to keep illegals from getting jobs belonging to citizens. They added some small enforcement measures, but that is all for naught by giving illegals the legal right to drive. And basically they have said in the bill that local law enforcement won’t touch illegals if they have one of these driver’s licenses unless and until after they commit crimes. All but the worst illegal alien criminals will get a NC driver’s license. With all of their aliases, which of the illegal immigrants multiple names will they check? And get this, to insult every citizen’s intelligence, they are calling this legislation the “Reclaim NC Act”.

See below to take initial action. This is SERIOUS. We need the help of all citizens!

The Republican sponsors claimed that they talked to all “stakeholders” before writing the legislation. I know for a fact that other than NC LISTEN and NC FIRE, they only talked to cheap labor industry folks and believe it or not, they took input from several illegal immigrant advocacy groups. This was an apparent attempt to curry favor in a futile attempt to get votes down the road….. I asked the sponsors of this bill if they actually talked to any unemployed citizens about their bill…….there was silence. I guess unemployed citizens aren’t really stakeholders?

The last time our state granted driving privileges to illegal immigrants, when Democrats were in power, our state became a magnet for illegals. The number of illegals dramatically increased by tenfold. Only four other states (New Mexico, Utah, Washington, and Illinois) give driver’s licenses to illegals and obviously none of them are in the southeast USA, so we will see an influx of illegals to our state. We worked for eight years to re-tighten requirements for a NC driver’s license and got it done but now the Republicans, who ran for election on our issue of immigration enforcement, are “giving the store away”.

This is a kick in the gut to unemployed citizens who need jobs, especially low-skilled citizens who are unemployed. 85% of illegals do NOT work on the farm. Apparently Republicans want to make it easier for illegal immigrants to drive to a job that belongs to a citizen. This certainly appears to be a payoff to industries in North Carolina that hire illegal immigrants.

First, I hope you will call and email Speaker Thom Tillis’s office and say kill House bill 786, the bill to give driver’s licenses to illegal aliens. Otherwise “you are again throwing umemployed citizens under the bus”, all the while pandering to illegal immigrants and giving them a driver’s license………(don’t let them tell you it’s a driver’s permit only…….that’s only deceitful on their part). They will probably try to BS you, so I would make comments and then hang-up. They found a few police officers who support this nonsense and they have already tried to sell it to me as a law enforcement initiative. It’s appears to be a payoff to industries that hire illegal immigrants.

Second, go to the link below and email and call your member of the NC House and ask them to vote against NC House bill 786, the bill to give driver’s licenses to illegal immigrants. Why are Republicans turning against their own citizens?

Send this to your friends and associates.

When u are burning in hell its not gonna matter weather u are legal or illegal ur gonna burn the same no one is better than anybody may God forgive u and u never have to go through what illegals do because it sucks and to God u blacks, whites,Chinese and Mexicans we are all the same so may God forgive y’all for being so hard on others

The rule of law is undermined by allowing illegals to remain in this country. Apparently, it is okay with advocates of illegal immigration for laws to be enforced against US Citizens, but not against illegal aliens. We cannot tolerate this double standard of Hypocrisy!