Anarchy is why we need a New World Order

Like many things, this is all David’s fault.  David made me do it.  He made me think about the evil of Anarchy and why we desperately need some overarching authority to do something about it.

Def: Anarchy: a state of lawlessness or political disorder due to the absence of governmental authority (1)

Fire and brimstone coming down from the skies…
Rivers and seas boiling …
Forty years of darkness !
Earthquakes, volcanoes …
The dead rising from the grave !
Human sacrifice,
Dogs and cats living together …
Mass hysteria. (2)

That is what many people envision when they hear the word Anarchy; but not all people …

“… prominent science fiction writers have delved into the possibilities of a society that’s resolved that there shall be no State. … it’s been tried, with varying degrees of longevity and success, many times in the history of Man. Yet there are no anarchic societies left on Earth …”

“Well, except for one: the whole of the human race.”

“The States of Earth exist in an anarchic relation to one another. Each has its own regional code of law …  there is no ‘super-State’ to enforce a uniform code of law over them all.” (3)

HURRY – we need to impose a layer of global government (New World Order), by consent if possible (treaty) and with force if necessary (conquest), to deal with the chaos.

But the rivers and seas are not boiling … no dead are rising from their graves … how about that !  Seems like there must be more to the definition of Anarchy … better read further.

Def: Anarchy – the absence of government; a utopian society of individuals who enjoy complete freedom without government (1)

What kind of social compact would be needed to establish a stable community of this nature?

“Our rule is simplicity itself: An it harm none, do as thou wilt.” (3) That sounds a lot like the two rules for civil society: do not encroach on others or their property; do everything you agreed to do.  This seems to correlate well with the concept of living in peace under common-law: the laws of nature only constrain him insofar as he may not create damage, violate the liberty or possessions of other, or create an obvious danger.

Let’s go back to the first portion of the definition for Anarchy: a state of lawlessness or political disorder due to the absence of governmental authority. A curious individual might ask: what is the minimum ‘structure’ needed to enable or assist individuals to live within the common-law?

Answer: a court that assesses damage and the retaliatory actions of individuals.  All we really need is a system of cultural and historical maxims that are based upon Natural Law, are internally consistent and constitute moral authority … common-law.

Where we are not operating under the social compact of common-law, we fall prey to two extremes: lawlessness of individuals and lawlessness of governments.

Marxist-communist-progressivist-anarchists (liberal lefties) dismiss Natural Law (common law) as irrelevant to their world-view and objectives. Consequently they are able to advocate destruction of property and create danger / injury to other individuals. Leftist useful idiots embrace the label “anarchy” in order to “act out” their destructive impulses.

Breach of the peace and social disorder do not happen because people violate statute and ordinance, positive law – regulation and malum prohibitum, it only happens when people violate natural law. (4)  A traditional American-anarchist, such as Lysander Spooner, would respect the maxims of common-law and the sovereignty of other individuals.

The lawlessness of governments emerges when you recognize “The State exists (ed) to legitimize those acts which no individual would be permitted by his neighbors to commit. … The masters of the State presumed to dictate what they, in their arrogance, called laws. They compelled and forbade all other men, with superior force as their only justification.” (5)

The State wants men to fear anarchy to ensure continued operation of the “protection racket”. “The State … is merely an organized band of predators with a veneer of legitimacy derived either from tradition or from a manufactured appearance of the consent of its subjects …” (5)

The label “anarchist’, without some form of descriptive adjective, tells you almost nothing about the behavior or intention of the person. Like every other complex subject, folks will have to do their own homework, internalize and understand.

So, if anarchy is actually a “neutral” term, and the State is inherently evil, then I guess we don’t really want anything to do with a New World Order … or a National government … or maybe not even a local government.

Anarchy isn’t so scary anymore, and the New World Order is clearly not a path to the salvation of man.

Please excuse me … I’m sorry to have bothered you. 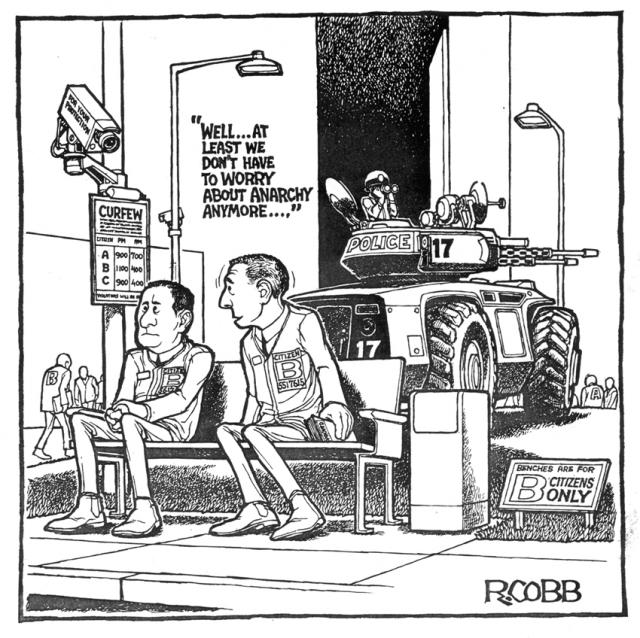 + In Search of Mr Jeffersons’ Liberty

+ More Musings of a Liberty Junky

Actually, it was the Lord telling me to nudge you. Three times. Seriously.

First a nudge, then a shove …. when were you planning to shoot, Mr Sunstein ?

Watch out for the retaliatory use of force !

This is truly a first. Thank you, most sincerely.

You are most welcome … and thank you.

Your novels are wonderful and contained some beautiful insights..

You’re too kind, really. By the way, have you yet gotten to Freedom’s Fury? If not, I’ll happily send you a 100%-discount coupon for an eBook.

Hello Francis -- No need for a coupon, I purchased and read Freedom’s Fury last month.

I probably would have included a reference from Fury in the post above, but I didn’t have a paper copy to mutilate with dog-ears and highlights. (yeah, I’m an old curmudgeon who really hates e-book readers -- either stand alone devices or PC apps)

I’m waiting patiently for another installment of the saga … perhaps Altheas’ search for Earth ?

(chuckle) Well, as it happens, there’s already a story about that: “The Last Ambassadors.” I wrote it long before I’d finished Which Art In Hope. But it’s short, and focused somewhat differently than the novels. I’ve toyed with the idea of a longer, more detailed version, but nothing has jelled yet.

The way readers have been pleading for more of the Spoonerite saga, it looks as if I’ll have to go back to it sooner or later. However, for the moment I’m working on a novel founded on “The Warm Lands,” which has its own legion of readers demanding a continuation!