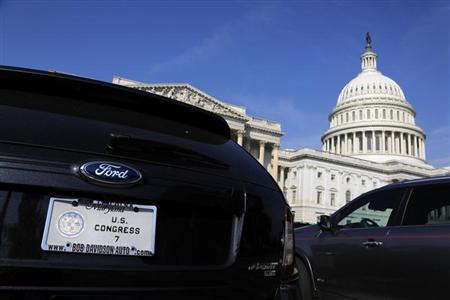 The cars of members of Congress, including one (L) belonging to a member of the Maryland delegation, fill the parking lot outside the House of Representatives during a Saturday session at the U.S. Capitol in Washington October 5, 2013. REUTERS/Jonathan Ernst

Scott Strzelczyk is fed up with what he calls political slavery in Maryland and sees one way out – creating a breakaway state, a feat that has not been accomplished since the American Civil War.

Riding a wave of anti-government sentiment across the United States, the small-town information technology consultant has launched a long-shot bid to get Maryland’s five conservative western counties to secede from the state, one of the most liberal and Democratic in the country.

“We think we have irreconcilable differences, and we just want an amicable divorce,” Strzelczyk, 49, told Reuters after pitching secession to the We the People Tea Party group in Carroll County, a county he hopes will be part of the split.

Strzelczyk’s breakaway bid is unlikely to be a serious threat to the state, since it faces nearly insurmountable obstacles. But he is not alone. His Western Maryland Initiative is just one of several secession proposals that are emerging across the United States.

Nearly a dozen rural Colorado counties have put nonbinding secession referendums on their November ballots. A split-off proposal for southern Florida has also been floated.

Some residents of northern California want to join with counties in southern Oregon to form their own state. Liberals in Tucson, Arizona, fed up with the conservative state governor and lawmakers, want out as well.

“We feel that our cause is just and holy; we protest solemnly in the face of mankind that we desire peace at any sacrifice save that of honor and independence; we seek no conquest, no aggrandizement, no concession of any kind from the States with which we were lately confederated; all we ask is to be let alone; that those who never held power over us shall not now attempt our subjugation by arms. This we will, this we must, resist to the direst extremity. The moment that this pretension is abandoned the sword will drop from our grasp, and we shall be ready to enter into treaties of amity and commerce that cannot but be mutually beneficial. So long as this pretension is maintained, with a firm reliance on that Divine Power which covers with its protection the just cause, we will continue to struggle for our inherent right to freedom, independence, and self-government.”