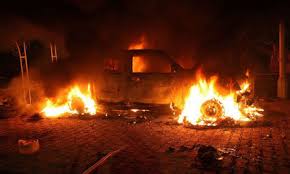 Video and documentary evidence shows that a Libyan-government-sponsored militia that reportedly provided support to American Marines on the night of the Sept. 11 Benghazi attacks is a radical Islamic militia that, like the presumed assailants, flies the black flag of jihad.

Over one month after the attacks – and despite a congressional hearing – the details of what occurred remain murky. But according to several largely concordant reports, certain broad outlines appear clear. It is generally agreed that the American consulate was attacked by Islamic extremists from a local Libyan militia. According to widely publicized speculations, the militia in question is thought to go by the name Ansar al-Shariah. Thus, for example, a recent New York Times article cites an eyewitness account attributing the attack to Ansar al-Shariah and notes that the witness claims to have seen the attackers “waving the black flag favored by such ultraconservative jihadis.”

On the other hand, members of another local Libyan militia, operating under the orders of the Libyan government, are reported to have joined forces with American Marines on the night of the attacks. A unit from the militia is reported to have met a Marine detachment at Benghazi’s airport and accompanied the Marines to a supposedly secret “safe house” where consulate personnel had taken refuge.

The “safe house,” however, would turn out to be neither secret nor safe. Instead, it would become the target of a second attack after the arrival of the Marines with their Libyan escort. Two Americans would die in this follow-up attack. Just how the assailants came to discover the location of the “safe house” is typically treated as a mystery.