Boehner ups the ante for a budget showdown in September 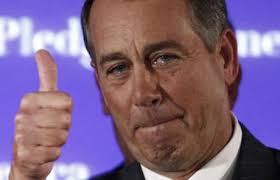 Speaker John Boehner (R-Ohio) told House Republicans on Thursday that he wants to push through a temporary spending measure that incorporates automatic cuts, upping the ante for a September budget showdown.

Boehner’s comments, delivered in a conference call with the rank and file, show that Republicans aren’t backing down from a face-off that could potentially lead to a government shutdown, even after GOP divisions over spending flared up shortly before the August recess.

But the call also underscored that the Republican conference has yet to make any decisions about whether to link their push to undercut President Obama’s healthcare law with a continuing resolution to keep the government funded past September.

Boehner focused squarely on Obama during Thursday’s call, according to someone listening, accusing the president of being so desperate to get rid of sequestration that he would go along with a government shutdown if Republicans didn’t get rid of it.

“The president’s threat to shut down the government if we implement his sequester is not a defensible position,” Boehner said. “The American people won’t stand for it, and we’re not going to be swayed by it.”

This article from the Hill would be more credible if we actually had a budget as the title implies.