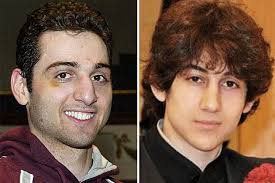 We have no idea whether or not the Chechen brothers Tamerlan and Dzhokhar Tsarnaev were the Boston terrorists.

But several parts of the official narrative are already falling apart.

Initially, the claim that they robbed a 7-11 is totally false. USA Today reported on April 19th:

There was a 7-Eleven robbery in Cambridge last night, but it had nothing to do with the Boston Marathon bombing suspects.

Margaret Chabris, the director of corporate communication at 7- Eleven, says the surveillance video of the crime was not taken at a 7-Eleven and that the suspect that did rob the 7-Eleven does not look like Tamerlan or Dzhokhar Tsarnaev.

“The suspect in the photos for that particular 7-Eleven robbery looks nothing like the suspects,” Chabris says. “The police or someone made a mistake. Someone was confused.”

At an earlier press conference morning, when [State Police Superintendent Timothy Alban] described the manhunt and standoff that resulted in the death of an MIT police officer, he also said that the two brothers robbed a 7-Eleven.

Moreover, the FBI initially denied ever having spoken with either of the brothers.  But CBS news notes:

The FBI admitted Friday they interviewed the now-deceased Boston Marathon bombing suspect Tamerlan Tsarnaev two years ago and failed to find any incriminating information about him.

Other oddities include the following:

This is a bad piece of writing, unusual for Zero Hedge. The headline makes it seem the article will show how everybody got everything wrong. It further seems to be supporting a case that the authorities may have the wrong people. That is blatantly false, IMHO. What really happened is what happens in every crisis, many so officials and media people spout off items as fact and we find out later they were wrong. We see it over and over and yet people still take those first utterances as laying the groundwork for conspiracies. I believe this is as dangerous as what the events create. Yes our government is as inept as it has ever been. Yes, they do lie to us about nearly everything that happens today. But by thinking that everything is a conspiracy muddies the water as we try to establish real truths. I believe Benghazi is one of those examples. We have allowed them to get away with it because it has now become the norm. Remember when one stupid little lie and coverup caused a president to resign and another caused a president to be impeached? I think we have lost that ability now.

If your assessment of the ability to impeach a president is lost, which options are left to the people? Submit or Resist? Is this what we have come to?

As usual, we haven’t been (and won’t be) told everything.