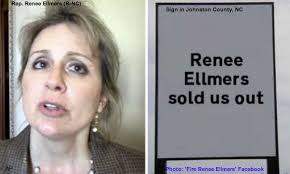 Yesterday, Ron Woodward of NC Listen reported on a meeting he had with Renee Ellmers on the topic of immigration and amnesty. He claimed he had exited the meeting appalled both by her positions and by her behavior.

One of the constituents attending the meeting recorded the conversation.

The Randolph Tea Party posted the clips online, and exclusively forwarded the links to PJ Media. Four clips of the meeting are embedded below.

At one point, Ellmers says of Woodard: “You don’t have any damn facts.”

Ellmers claims he is stereotyping, and constantly interrupts him. This conduct occurred after she had inconvenienced the group by changing locations at the last minute, refused to let all of the attendees into her office, and insisted she had to be leaving shortly.

Listen to her positions on immigration, and see if they follow her claim that she holds the same positions as Ted Cruz, Rand Paul, and Mike Lee. Yesterday, Lee’s Communication Director Brian Phillips answered her claim with this statement:

This entry was posted in Editorial, Immigration and tagged Renee Ellmers. Bookmark the permalink.