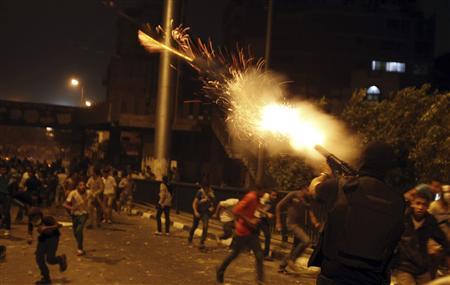 A riot police officer fires tear gas during clashes between anti-Mursi protesters, and members of the Muslim Brotherhood and ousted Egyptian President Mohamed Mursi supporters, along a road at Ramsis square, which leads to Tahrir Square, at a celebration marking Egypt’s 1973 war with Israel, in Cairo October 6, 2013. At least 28 people were killed and more than 90 wounded in clashes during protests in Egypt on Sunday, security sources and state media said, as the crisis since the army seized power three months ago showed no sign of abating. REUTERS-Amr Abdallah Dalsh

At least 51 people were killed in clashes in Egyptian cities on Sunday, security sources said, after opponents and supporters of deposed president Mohamad Mursi took to the streets in one of the bloodiest days since the army seized power.

In a sign of more possible violence to come, an alliance including Mursi’s Muslim Brotherhood urged Egyptians to protest from Tuesday and gather on Cairo’s Tahrir Square on Friday, declaring: “No one will stop us from (Tahrir) no matter what the sacrifices”.

Egypt has been gripped by turmoil since the army ousted Mursi on July 3 after mass protests against his rule, prompting his Muslim Brotherhood to demonstrate in the streets.

On August 14, the military-backed authorities smashed two pro-Mursi sit-ins in Cairo, with hundreds of deaths, and then declared a state of emergency and imposed a curfew. Many of the Brotherhood’s leaders have been arrested since.

At Ibn Sina hospital in the Mohandiseen district of Cairo, a Reuters reporter saw eight bodies shrouded in blue and white sheets among pools of blood.

This entry was posted in Editorial and tagged Egypt. Bookmark the permalink.