Déjà Vu in Wyoming? Doomsday Legislation Is Under Study 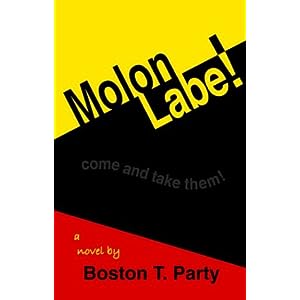 Here is the synopsis of the novel Molon Labe! which I highly recommend:

After a decade of retaking their stolen freedoms, the people of Wyoming (many of them newcomers) are forced to finally confront their jealous masters in the U.S. Government. Can a lone, courageous state successfully resist federal tyranny, or has the Bill of Rights been reduced to a myth? Can an allegedly free people act free, or is our liberty just a 4th of July farce?
These issues weigh heavily on the shoulders of Governor James Wayne Preston, a decorated Desert Storm Marine helo pilot. Elected in 2014 on the Laissez-Faire Party ticket, he enjoys nearly full support of the legislature to return Wyoming to a long-lost era of liberty. But how far can he and the people of his state go before Washington, D.C. feels compelled to act? Will Wyoming’s free and independent course reach actual secession? Will President Melvin Connor suppress the maverick Western state with federal troops? Will anybody come to Wyoming’s aid?
Molon Labe! is a fictional account of a real-world blueprint for a free state initiative focused on Wyoming. If enough freedom-loving individuals will relocate there under a useful pattern, they can “liberate” the Cowboy State on many levels. In Wyoming we could truly enjoy our rights of gun ownership, privacy, schooling, health and diet, unrestricted travel, and property. Boston shows us how it actually can be done!

CHEYENNE — State representatives on Friday advanced legislation to launch a study into what Wyoming should do in the event of a complete economic or political collapse in the United States.

House Bill 85 passed on first reading by a voice vote. It would create a state-run government continuity task force, which would study and prepare Wyoming for potential catastrophes, from disruptions in food and energy supplies to a complete meltdown of the federal government.

The task force would look at the feasibility of Wyoming issuing its own alternative currency, if needed. And House members approved an amendment Friday by state Rep. Kermit Brown, R-Laramie, to have the task force also examine conditions under which Wyoming would need to implement its own military draft, raise a standing army, and acquire strike aircraft and an aircraft carrier.

The bill’s sponsor, state Rep. David Miller, R-Riverton, has said he doesn’t anticipate any major crises hitting America anytime soon. But with the national debt exceeding $15 trillion and protest movements growing around the country, Miller said Wyoming — which has a comparatively good economy and sound state finances — needs to make sure it’s protected should any unexpected emergency hit the U.S.

Several House members spoke in favor of the legislation, saying there was no harm in preparing for the worst.

“I don’t think there’s anyone in this room today what would come up here and say that this country is in good shape, that the world is stable and in good shape — because that is clearly not the case,” state Rep. Lorraine Quarberg, R-Thermopolis, said. “To put your head in the sand and think that nothing bad’s going to happen, and that we have no obligation to the citizens of the state of Wyoming to at least have the discussion, is not healthy.”

Wyoming’s Department of Homeland Security already has a statewide crisis management plan, but it doesn’t cover what the state should do in the event of an extreme nationwide political or economic collapse. In recent years, lawmakers in at least six states have introduced legislation to create a state currency, all unsuccessfully.

The task force would include state lawmakers, the director of the Wyoming Department of Homeland Security, the Wyoming attorney general and the Wyoming National Guard’s adjutant general, among others.

The bill must pass two more House votes before it would head to the Senate for consideration. The original bill appropriated $32,000 for the task force, though the Joint Appropriations Committee slashed that number in half earlier this week.

University of Wyoming political science professor Jim King said the potential for a complete unraveling of the U.S. government and economy is “astronomically remote” in the foreseeable future.

But King noted that the federal government set up a Continuity of Government Commission in 2002, of which former U.S. Sen. Al Simpson, R-Wyo., was co-chairman. However, King said he didn’t know of any states that had established a similar board.

President Obama just met with Democrat Governors and a major topic of discussion was what they could do to go around Congress because they can’t wait…it appears they’re not happy with our system of government and are planning to commit treason and promote sedition among the democratic states. I’d say Wyoming should speed their planning up and prepare for civil unrest in many of our “Blue” states.

congrats to Arizona -- you are no longer at the top of Obobo’s hit list!

The real problem is they will go ahead with their plans with no opposition. I know of no other states, including Republican states run by the likes of the Chris Christies, that will do anything like what Wyoming has just done. Look at Arizona. They are being sued by their own Federal government in conjunction with a foreign state and still nothing. The man came to Brewer’s state and made a fool of her and still nothing. I suggest everyone load their trucks and let’s all head for Wyoming, baby!!!