Posted on September 2, 2018 by DRenegade 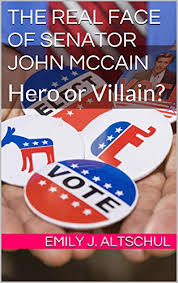 John McCain’s death has elevated him to heights unparalleled in life by the main street media and Democrats. His funeral was used as a means to attack the President. His new best friends, Barack Obama, Joe Biden and George Bush, all gave eulogies to honor his service to the country.

We live in a country that is divided into two camps. It is obvious to me which side John McCain was on. A man who cast the deciding vote to keep Obamacare which is destroying the middle class. A man whose arrogance would not let him perform his duties as a senator since December 7, 2017 but would not resign his perceived “power”. A man who will be remembered at the chief warmonger in the Congress. I will not discuss the consequences of his “wet start” on the USS Forrestal or his undocumented collaboration with North Vietnam: these two incidents will never be proven. I do remember the unrelenting attacks on Newt Gingrich for having an affair while still married. John McCain received a pass for the same transgression.

The Argument Over the Greatness of America | NCRenegade

[…] is not based in fact and is a petty attempt to raise up her father’s image. As I wrote earlier, this is a tactic used by the Deep State to destroy our country. But my opinion does not matter. […]

David, as much as I disliked McCain and his politics, I’m not at all sure that the incident on the Forrestal was as we might like to think. Documented evidence (if it’s is to be believed) holds that he is blameless for the incident; a bomb from another fighter MAY have been activated due to horrible and inexcusable lack of oversight and procedural sloppiness -- the fog of war. Personally, I have no respect for the man or his “legacy”, but let’s not use skewed historical information unwisely.

I do not disagree with you which is why I said it would never be proven. Some accounts state that John McCain’s wet start and subsequent flame was the cause of the other missile’s launch. Even if this is true, the government will never release it. They also will never release the records showing collaboration with North Vietnam that has been covered up. I know the other facts as written and I believe that this man’s quest for power and war was insatiable.

His collaboration is very much in evidence and his broadcasts were captured by the CIA and are well known. I do not blame him for his actions but curse him for what he did to POWs after he was an elected representative. May he rot in hell forever.