Kevin Freeman discusses economic terrorism on GBTV.com. This is the first part of a series that will be presented by Glenn Beck on GBTV.com this week (January 16 – 20th, 2012). Mr. Freeman’s book outlining this threat to our country is Secret Weapon. Click here to buy the book at Amazon. 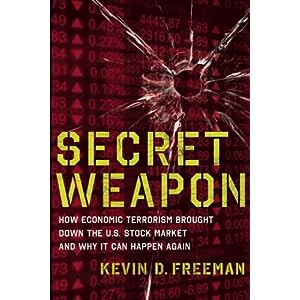 Here is the definition of a “bear raid“:

A trader’s attempt to force down the price of a particular security by heavy selling or short selling. In the case of short selling, the trader then makes a profit by buying the stock cheaply to cover the short position. Bear raids are often carried out by large groups of traders together, since an individual trader might not have a large enough trade to influence market price significantly. This practice is not allowed under SEC regulations.

This type of terrorist attack has a high probability of being launched again this year. Have you protected your assets from this type of attack?