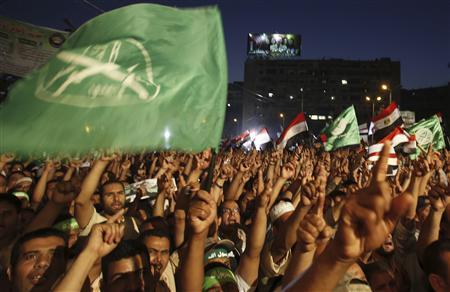 Two people, one an American, were killed when protesters stormed an office of Egypt’s ruling Muslim Brotherhood in Alexandria, adding to growing tension ahead of mass rallies aimed at unseating the Islamist president.

A third man was killed and 10 injured in an explosion during a protest in Port Said, at the mouth of the Suez Canal. Police on Saturday said the cause was unclear but protesters, believing it was a bomb, attacked an Islamist party office in the city.

Egypt’s leading religious authority warned of “civil war” after violence in the past week that had already left several dead and hundreds injured. They backed President Mohamed Mursi’s offer to talk to opposition groups ahead of Sunday’s protests.

The United Nations, European Union and United States have appealed for restraint and urged Egypt’s deadlocked political leaders to step back from a confrontation threatening the new democracy that emerged from the Arab Spring revolution of 2011.

The U.S. embassy said in a statement it was evacuating non-essential staff and family members and renewed a warning to Americans not to travel to Egypt unless they had to.