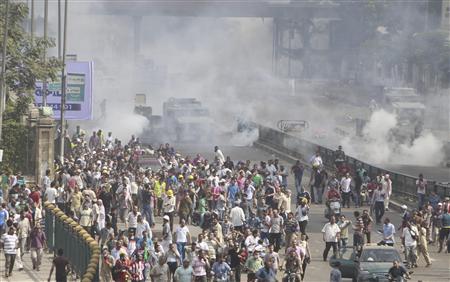 Egyptian security forces killed at least   525 people on Wednesday when they moved in to clear a camp of Cairo protesters demanding the reinstatement of deposed President Mohamed Mursi, his Muslim Brotherhood movement said.

There was no official confirmation of the death toll at Rabaa al-Adawiya, in northeast Cairo, where thousands of Mursi supporters have staged a six-week sit-in that caused the army acute embarrassment since it ousted the elected leader.

A second camp near Cairo University was swiftly cleared in the early morning.

The operation, which suggested that the powerful military had lost patience with persistent protests that were crippling parts of the capital and slowing the political process, began just after dawn with helicopters hovering over the camps.

This entry was posted in Civil Unrest, Editorial and tagged Cairo, Eqypt, Protests. Bookmark the permalink.