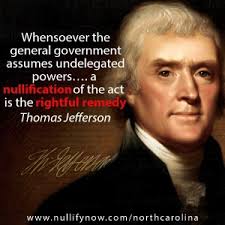 The new law states, in part:

The bill also provides for criminal penalties against federal agents who attempt to enforce specific federal laws on guns manufactured in the state of Kansas and sold within the state – as the state takes the position under the new law that the federal government does not “interstate commerce” authority over such items.

In his letter, Holder didn’t take too kindly to such a proposition.  He wrote:

“In purporting to override federal law and to criminalize the official acts of federal officers, SB102 directly conflicts with federal law and is therefore unconstitutional.”

He continued, “Under the Supremacy Clause…Kansas may not prevent federal employees and officials from carrying out their official responsibilities.  And a state certainly may not criminalize the exercise of federal responsibilities.  Because SB102 conflicts with federal firearms laws and regulations, federal law supercedes this new statute; all provisions of federal laws and their implementing regulations therefore continue to apply.”

So defending the Constitution is unconstitutional? Kansas and other states need to knock the chip off Holder’s shoulder.