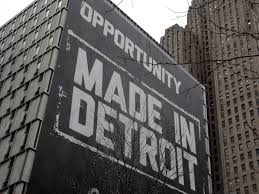 Detroit foreshadows the fate of the United States

Economist and Boston University Professor Laurence Kotlikoff calculates that to fully eliminate the shortfall in Social Security funding, the government would need to either cut all present and future social security benefits by 22%, or increase the Federal Insurance Contributions Act tax (FICA) by 32% (from 12.4% to 16.4%). But this is just to fix Social Security!

For the U.S. Federal Government as a whole, Kotlikoff estimates the fiscal gap to be around $222 trillion!  This is many orders of magnitude larger than GDP. In order to wipe out this gap, the Federal Government would need to permanently increase all taxes by 64% or reduce all expenditures (with the exception of debt servicing) by a whopping 40%.

The problem is clear; every level of government has promised too much and is now faced with the politically unappealing prospect of either drastically increasing taxes for the working age population or significantly reducing benefits for the retired (or future retired). As evidenced by the Detroit bankruptcy, the longer we wait, the worse it will get. The greater the delay, the more pain and suffering citizens will face when the benefits and safety nets they have come to expect from the government suddenly disappear.

Given that the Federal government would need to cut all expenses by 40% to balance the books (according to Kotlikoff), it is not hard to imagine that Social Security, Medicare and Medicaid would suffer haircuts in excess of those experienced by the Detroit pensioners.

Over time, politicians from all stripes have proven adept at cognitive dissonance, but these increases in taxes and cuts to benefits will have to happen, one way or another; it is just a matter of time.

This entry was posted in Editorial, Financial and tagged Bankrupt, Detroit. Bookmark the permalink.