“Ethnic cleansing” of Christians in Homs – The Vatican 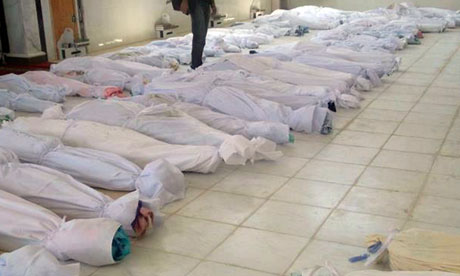 The article below was written on March 21,2012. The Houla massacre occurred in Homs and the truth about who is responsible has become a political issue instead of an issue of humanity.

ASIA/SYRIA – Abuse of the opposition forces, “ethnic cleansing” of Christians in Homs, where Jesuits remains

Damascus (Agenzia Fides) – While the Syrian opposition forces have been guilty of violence, abuse, torture – as stated in a report released yesterday by the NGO “Human Rights Watch” – in Homs there is “an ongoing ethnic cleansing of Christians”, carried out by some Islamist members of the “Brigade Faruq”. So says a note sent to Fides by some sources in the Syrian Orthodox Church, which includes 60% of Christians in Syria. Militant armed Islamists – says the note – have managed to expel 90% of Christians in Homs and confiscated their homes by force. According to Orthodox Metropolitan sources, the militants went door to door in the neighborhoods of Hamidiya and Bustan al-Diwan, forcing Christians to flee, without giving them the chance to take their belongings. In the “Faruq Brigade”, note other sources, there seems to be armed elements of various Wahhabi groups and mercenaries from Libya and Iraq.

The Vicar Apostolic of Aleppo, Mgr. Giuseppe Nazzaro told Fides: “We have no sources to confirm this information directly, but we can say that these relationships are beginning to break down the wall of silence built up to now by the press worldwide. In this situation Islamist and terrorist movements are making headway”. The Vicar remembers with concern some recent episodes: “Last Sunday, a car bomb exploded in Aleppo packed with TNT, in the vicinity of the school of the Franciscan fathers. By a miracle a massacre of children was avoided, at the Center of catechesis of the Church of St. Bonaventure: only because the Franciscan, sensing danger, made the children leave 15 minutes before the usual time. Other bombs exploded in Damascus: these are bad signs for religious minorities”. On the prospects of the situation, the Vicar says, “I am confident that peace can return: for this we Christians count on constant praying”.

Meanwhile, in Homs, say sources of Fides, some Jesuits who have decided to stay in the city are giving a heroic witness: promising to bring comfort and humanitarian aid to people in need, they fulfill their mission being “bridge builders”. The religious claim that the forces involved are inspired to tolerance, cultural and religious pluralism, calling for dialogue, rejecting violence and calling for respect for human dignity and values of the Gospel. The Jesuits in Syria are engaged in the service to young people, refugees, education of children and adults, interreligious dialogue, in rural development projects. (PA) (Agenzia Fides 21/3/2012)