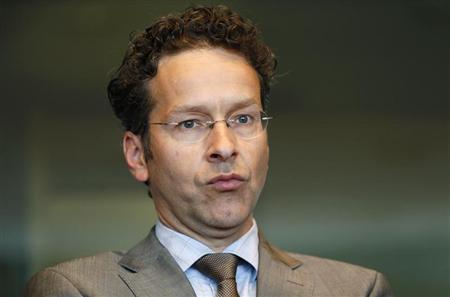 Eurogroup chairman Jeroen Dijsselbloem waits to address the European Parliament’s Economic and Monetary Affairs committee to discuss the way in which assistance to member states has been conducted, particularly Cyprus, in Brussels May 7, 2013. REUTERS/Francois Lenoir

The European Union agreed on Thursday to force investors and wealthy savers to share the costs of future bank failures, moving closer to drawing a line under years of taxpayer-funded bailouts that have prompted public outrage.

After seven hours of late-night talks, finance ministers from the bloc’s 27 countries emerged with a blueprint to close or salvage banks in trouble. The plan stipulates that shareholders, bondholders and depositors with more than 100,000 euros ($132,000) should share the burden of saving a bank.

The deal is a boost for EU leaders, who meet later on Thursday in Brussels, and can show that they are finally getting to grips with the financial crisis that began in mid-2007 with the near collapse of Germany’s IKB.

“For the first time, we agreed on a significant bail-in to shield taxpayers,” said Dutch Finance Minister Jeroen Dijsselbloem, referring to the process in which shareholders and bondholders must bear the costs of restructuring first.

The writing is on the wall for the United States. This was put in place here by Dodd-Frank.