Ever Wonder How Effective the Department of Homeland Security Is? 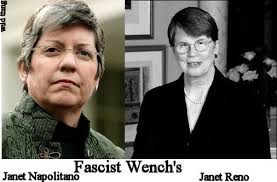 The Department of Homeland Security: always brings visions of Nazi Germany to mind. The newest campaign issue is “Do you feel safer now than four years ago”? Absolutely not. In fact my safety (as is your safety) is in jeopardy from domestic enemies that are supposed to be providing our security.

I have a dream. One day, the two Janets and Eric Holder will be brought to justice. On that day, we know that America has regained its way and its long journey back to the rule of law and the Constitution.

The Department of Homeland Security has spent hundreds of millions of dollars on a network of 77 so-called “fusion” intelligence centers that have collected personal information on some U.S. citizens — including detailing the “reading habits” of American Muslims — while producing “shoddy” reports and making no contribution to thwarting any terrorist plots,  a new Senate report states.

The “ fusion centers,” created under President George W. Bush and expanded under President Barack Obama, consist of  special   teams of  federal , state and local officials collecting and analyzing  intelligence on suspicious activities throughout the country.  They have been hailed by Homeland Security Secretary Janet Napolitano as “one of the centerpieces”  of the nation’s counterterrorism efforts.

But a bipartisan report by the Senate Permanent Subcommittee on Investigations released Tuesday concludes that the centers “often produced irrelevant” and “useless” intelligence reports. “There were times when it was, ‘What a bunch of crap is coming through,’” one senior Homeland Security official is quoted as saying .