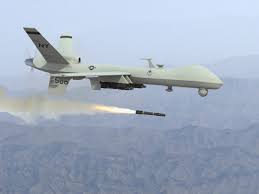 A U.S. drone strike killed seven people and wounded three in northwest Pakistan late on Friday, security officials said, in the first such attack since the swearing-in of Nawaz Sharif as prime minister this week.

In his inaugural address to parliament, Sharif called for an immediate end to U.S. drone strikes on militants, which many view as a breach of Pakistan’s sovereignty.

The bombing comes 10 days after a similar U.S. drone attack killed the Pakistani Taliban’s second-in-command, Wali-ur-Rehman, and six others in a major blow to the militant group.

President Barack Obama said last month the United States would scale back drone strikes, only using them when a threat was “continuing and imminent”.

This entry was posted in Editorial and tagged Drone, Nawaz Sharif, Pakistan. Bookmark the permalink.