France Backs Down from Syrian Attack 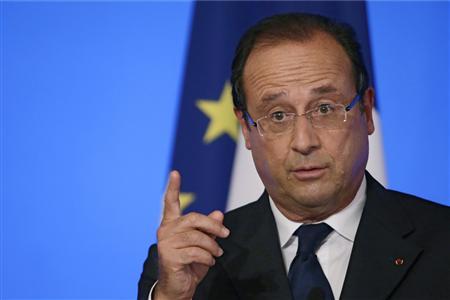 French President Francois Hollande said on Thursday that Syria needed a political solution, but that could only happen if the international community could halt killings like last week’s chemical attack and better support the opposition.

Hollande sounded a more cautious note than earlier in the week, when he said France stood ready to punish those behind the apparent poison gas attack that killed hundreds of civilians in Damascus.

He indicated that France was looking to Gulf Arab countries to step up their military support to the opposition to President Bashar al-Assad, after Paris said this week it would do so.

“Everything must be done for a political solution but it will only happen if the coalition is able to appear as an alternative with the necessary force, notably from its army,” Hollande told reporters after meeting the head of the opposition Syrian National Coalition, Ahmed Jarba.

“We will only manage this if the international community can put a temporary stop to this escalation in violence, of which the chemical attack is just one example,” Hollande said.

This entry was posted in Editorial, War and tagged France, Hollande, Syria. Bookmark the permalink.