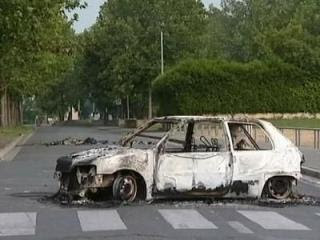 POLICE are on high alert in France amid fears that riots in the northern city of Amiens could spread through the country’s tinderbox suburbs against a backdrop of racial tension.

In a sign of his alarm, President Francois Hollande interrupted his holiday to promise a tough response to the youths who have brought havoc to council estates.

His pledge came amid signs that the discontent that simmers perpetually in France’s suburban ghettos with their drugs and unemployment could explode once more into an open confrontation with the authorities.

Mr Hollande was speaking as the French awoke to discover scenes of destruction in the usually calm city, where a school and a sports centre were razed in clashes between about 100 rioters and 150 police in the early hours of yesterday.

Sixteen officers were injured as youths aimed buckshot and fireworks at them and hurled flagstones and furniture from the windows of empty flats in council blocks. Police failed to make any arrests.

We are all Greeks now…soon we will all be French.