Greece On The Verge? Military Special Forces Have 15 Demands… Or Else 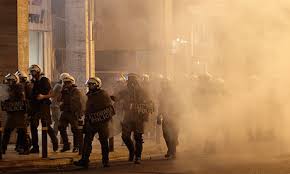 Greek government authorities are on alert after a union of Greek army reservists of Special Forces issued a statement urging the Greek administration to step down and make way for a national unity government. As Keep Talking Greece notes, the statement on the union’ website included 15 demands – including the resignation of the Greek President – and urged people to gather at the infamous Syntagma Square on Saturday. The statement was interpreted by some as a call to a “coup d’etat” – denied by the union – but prompted Greece’s Supreme Court to meet to discuss it.

The announcement of reservists as posted on the website keed-hellas.blogspot.com

“OUR PRIMARY PURPOSE DEFENSE OF OUR COUNTRY.

Reservists Special Forces and the Greek people to implementation of Article 120 of the Constitution requires:

1. IMMEDIATE RESIGNATION OF GOVERNMENT of the impossibility of providing the people as provided in the Constitution at Work (Article 22), health, education, justice, security.

2. ESTABLISHING A NATIONAL GOVERNMENT PLANS chaired by Supreme Court of personalities on proven outside politics and consultants from the Academy of Athens.

3. SUSPENSION OF APPLICATION NOTICE MNIMONIAKON laws and within two months, with a ban on participation of all citizens who participated in the governments responsible for the current economic situation.

4. EXAMINING BOARD of the supreme court and accountability for the HOW and WHO led us to Catastrophic Agreement Memorandum. Establishment of Constitutional Court Effective power impose its will.

5. Immediate suspension of dismissal from the State.

First Egypt, now (most likely) Greece…how long before this revolt spreads like a contagion around the world? How long until it comes to America (if we can get the sheeple to put down their remote controls and Big Macs)? Are the great unwashed masses, the benighted mundanes of the world tiring of the self serving, self anointed governing elites?

This coup d’etat by Greek forces will be the reinstitution of the origin of liberty in Western Civilization. Greece is the fountainhead of the concept of the Republic, and it is time that Greece drove these Talmudic Zionists who have destroyed their Republic into the foulest reaches of Tartarus. These Rothschild Zionists intentionally promulgated the debt-usury prison that has enslaved this magnificent country and culture.

The United States can follow the blow for liberty that Greece has struck and drive these international banker slime and their Federal Reserve and IRS back to Israel, a country of vile Talmudic hoods.

I get it. You do not like Zionists. I believe you can make your point more succinctly without the vitriol.

I may not be qualified in your mind to make dismissive, condescending comments but I am qualified to blacklist you which I have done.