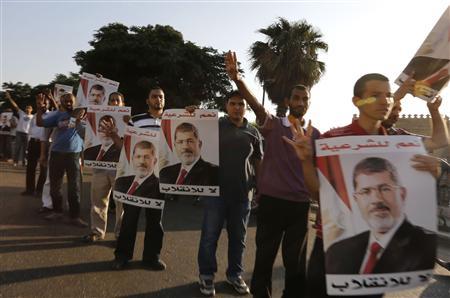 Suspected Islamist militants killed at least 24 Egyptian policemen on Monday in the Sinai peninsula, where attacks on security forces have multiplied since the army overthrew President Mohamed Mursi on July 3.

Three policemen were also wounded in the grenade and machinegun attack near the north Sinai town of Rafah on the border with Israel, medical and security sources said.

The attack underlined the challenges facing Egypt’s new rulers, locked in a struggle with Mursi’s Muslim Brotherhood in which at least 850 people have been killed since the security forces opened fire at pro-Mursi protest camps last week.

This entry was posted in Civil Unrest, Editorial and tagged Egypt. Bookmark the permalink.