Holder recused himself from DoJ decision to seize AP records 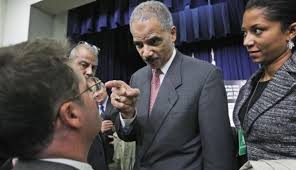 Holder said he recused himself early on in the DOJ’s investigation of what he described as some of the most serious leaks from government officials that jeopardized national security. Deputy Attorney General James Cole signed off on the subpoena authorizing the seizure of the AP’s phone records last year.

Because he recused himself, Holder said he does not have all of the facts surrounding the probe, which is coming under intense scrutiny.

“I don’t know all that went into the formulation of the subpoena,” Holder said at a press conference on Tuesday.

The AP on Monday called the seizure a “massive intrusion” that struck at the heart of a free press, and lawmakers in both parties have criticized the Justice Department’s actions.

None of these sons of bitches ever have knowledge of anything!! You know that as soon as Holder or Obozo walk up to a mike the first words out of their mouths is that they didn’t know anything about the situation until three minutes ago. Holder and Obozo are tyrants to the highest degree!!

[…] Holder recused himself from DoJ decision to seize AP records […]