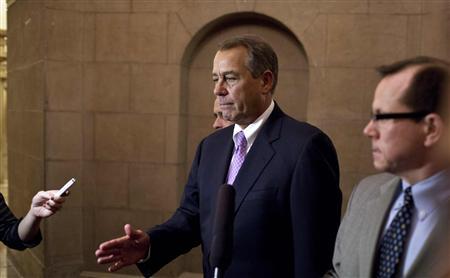 Hopes rose on Monday that Washington will be able to step back from the “fiscal cliff” as President Barack Obama and Republican John Boehner inched toward a deal that would prevent steep tax hikes and spending cuts that could push the economy into recession.

The two men held talks at the White House and aides from both parties said they were optimistic an agreement was shaping up.

Though Obama and Boehner appeared to be edging closer to an agreement, substantial hurdles remain. Rank-and-file Republicans could have trouble with the tax increases on the wealthiest Americans that are likely to be part of any deal, while Obama could have a tough time selling spending cuts to his fellow Democrats.

Democratic Representative Chris Van Hollen, a member of the House leadership from Maryland, said he saw a 50 percent chance of putting an accord in place before January, when $600 billion worth of across-the-board tax increases and spending hikes are due to begin kicking in.

“I still think there’s quite a ways to go before the finish line,” he said.

But investors were cheered by signs of progress and the Standard & Poor’s 500 index of U.S. stocks rose 1.19 percent.

This entry was posted in Editorial, Financial and tagged Fiscal Cliff. Bookmark the permalink.