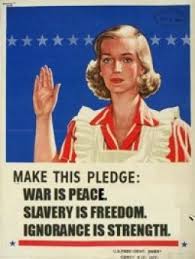 How will we know when the collapse is upon us?

The answers were outlined in Atlas Shrugged and 1984. Both novels outlined the use of propaganda to control people as the “elite” governed through the use of shared sacrifice for the greater good. Sacrifice now because everything will be better tomorrow. Although the outcomes in the novels diverged, the same methodology is practiced daily in the United States.

We will not know when the collapse is upon us (or be prepared), if we believe what the government controlled media publishes. This propaganda will always misdirect our attention so that people ignore persistent facts:

So where does that leave us? The first step as outlined before begins with you.

Today, we got more great news on the housing front as housing starts rose from an upward revised 910K (was 890K) to 917K, modestly beating expectations of a 915K print. This was a blistering number, and as the mainstream media will have you know, was the second highest early 2008, lower only compared to the very amusing 982K starts recorded in the dead of winter in December of 2012. All of this would be great if it didn’t have one rather profound two word caveat: “seasonally-adjusted.” What happens when one strips away the Arima-X-12 seasonal adjustments? We have the answer! As the chart below shows, when one maps the seasonal pattern in the winter, the November-February three month period, one gets the following chart….