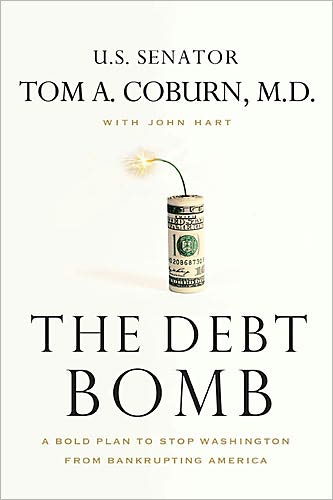 Concerning the economic collapse of the United States, how did we get here?

We are where we are today because career politicians have prostituted the founders’ clear intention to limit government in the name of “doing good.” For decades both parties have grown government well beyond the boundaries of the Constitution and created the very problem our founders sought to avoid – a deeply indebted government that is threatening the very survival of our republic.

The above assessment may not account for 100% of our economic collapse: we have to include corruption and incompetence in Washington, DC to have a complete accountability of the causes. But here is the incredible part: not only were the people complacent (and therefore culpable) in the demise of the republic, we still argue that political parties are the solution. The small percentage of the people who understand our financial debt crisis are blinded by supporting only one solution: get Obama out of office.

Alright. I agree that this president has not only destroyed our economy and social structure, he has also destroyed the Democrat party. Good. If we destroy the Republic party, we have a chance to save the republic. Step one is to stop arguing for our ignorance. Again both parties have gotten us to this point and neither one will or can fix it. A rather bold statement so let’s explore it a little further.

The monetary policy of our country is controlled by an independent banking committee known as the Federal Reserve. Under their control, our dollar has been devalued and manipulated to the point of insolvency.  Does the government understand this? Of course but they are impotent to control the situation, let alone fix it. The endgame is close upon us and the prognosis is terminal. How do I know? The government has taken control of your money market assets so that you do not control your private property. If people started to withdraw their cash, our banks would collapse immediately. Think about that statement because that is one of the keys. We no longer have control over our own money.  Have you tried to withdraw a large sum from the bank recently?

Most of our banks and brokerage firms are also leveraged with European credit derivatives that are worthless. The recent examples of MF Global, PFG Best and the Sentinel Group proved that these institutions not only stole assets from their clients’ segregated accounts, the assets will not be recovered (unless you are Jamie Dimon).

Step two is to understand that the government is not only bankrupt, our financial institutions are bankrupt. This means accepting the fact that the US dollar will collapse. When will this happen? Whenever China revalues their currency on hard assets – mainly gold. At the rate of their gold hoarding, it will not be long before our dollar will no longer be the world’s reserve currency.

Step three is to understand that the price increases for gas and food are not going to moderate: they are going to “necessarily skyrocket”.

Step four is to understand that the value of the stock market is 50% higher than it should be due to the actions of the Federal Reserve. This means that your portfolio can be cut in half overnight when people understand these simple steps.

Step five is to stop relying on the government for a solution because they have no viable solutions. Fortunately, there is a growing number of people who do understand this (outside of the political class) and they have taken measures already to protect their assets. They have sold their equities and are cash or gold rich. Which is why the money markets will be frozen. Stop looking at the value of the stock market and look at the volume of trades: they are off over two thirds from four years ago.

If you truly understand how we got here, you now have to ask yourself where you are going? And I mean you, because personal responsibility is the only solution for your future. The government is not buying massive amounts of hollow point bullets to protect your assets.

The dems and the rebubs are the ones that voted it to be a 2 part system. It would be a good thing to get rid of them both and start over. I’m not convinced that the libratarians are all that great either since they can’t define who they are either. It looks like our goose is cooked no matter which we turn. Throw all the bums out and start over.

The problem with throwing them out, starting over or any other scenario is that we are now embedded with so many regulatory agencies coming from DC it is impossible to get rid of them. These people, just like the parties, are not going to roll over and die just because a few million people want them to. Do you honestly believe the majority of seniors on SS will give it up in the name of freedom? Will the college age give up student loans and grants in the name of freedom. Most people, not just Dems, believe the jobs market is actually helped by hiring more public servants, such as teachers and police. What will any sector give up in the name of freedom? Hmmm.

In Sen. Coburn’s book, he makes another telling statement. When he addresses a group of people, he always asks senior citizens who would be willing to sacrifice a reduction in their benefits to give their children and grandchildren a better life. They answer that they would but reality may be different. Either way, I did not intend this article to be the solution to government: I meant it to be the beginning of retaking our country for our children.

We cannot rebuild if we do not have assets. The government has stolen our property and will continue to do so. At this point, people are the masters of their own fate. If you know anyone in the banking industry, ask them about the number of people withdrawing their money and closing their accounts. At some point, the “safeguards” (for the government) will be implemented.

And therein lies the problem. The government holds all the cards unless people who are willing to break the law invest in hard assets with the intention of keeping them regardless of what the government demands. And they will demand, once again, that everyone turn in their gold. And they will destroy the the value completely (it’s well on its way now) of the currency everyone is holding. I fear very few will refuse the dictates of a government that demands anything from its citizens. Proof of that is how we the people have coalesced to the TSA among other examples. Again, I believe we are going to have to break away and form new nations based on the principles we hold dear. If people do that all over the country, the smaller numbers will be much more effective. Just my humble opinion.