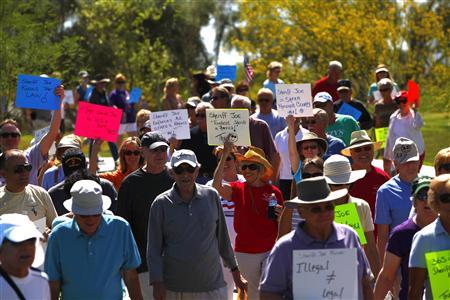 (Reuters) – As many as 200 activists, some chanting “go Joe, go Joe,” rallied in Arizona on Saturday to support Maricopa County Sheriff Joe Arpaio, who is facing a federal racial-profiling probe for his police sweeps against illegal immigrants.

“Sheriff Joe is one of the very few guys who will enforce the immigration laws across this nation,” said Randy Hatch, who used a megaphone to rally supporters of Arpaio at a park in this northeast Phoenix valley city.

“Every constitution and country that has ever existed has had to have sovereign borders,” he said to cheers from the crowd, some clutching placards reading “Sheriff Joe keeps us safe” and “illegal is illegal.”