I Am Not Buying It… 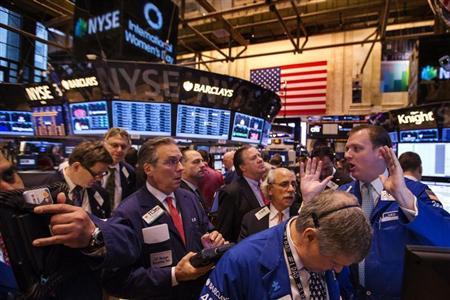 Traders work on the floor at the New York Stock Exchange just after the opening bell, March 8, 2013. REUTERS/Lucas Jackson

I am not buying the news concerning a NYSE disaster backup plan. Any event which would shutdown the New York Stock Exchange would be temporary in nature according to this report. With the “test” high frequency trades (HFTs) seen over the past few months, it is more likely that this “plan” will allow certain institutions time to raid the market as the average investor is locked out. Like MF Global customers after Jamie Dimon of JP Morgan raided its assets.

How do you know when the economic collapse is getting close? Here is one trigger.

The New York Stock Exchange is readying plans to be able to operate without human traders in case another disaster, such as Superstorm Sandy, forces the shutdown of its historic trading floor in downtown Manhattan, The Wall Street Journal reported.

NYSE Euronext (NYX.N) is preparing to submit details of the plan to the U.S. Securities and Exchange Commission, according to the report, which cited people involved in the preparations. If activated, the plan would represent the first time the 221-year-old exchange would rely entirely on computer systems, without the oversight of floor-based traders, the paper said.