Women and children gassed (not burned) to death just so the ATF could raise money. No consequences for the government. I remember the “trials” afterward where the judge misled the jury concerning sentencing. The jurors were literally crying afterward.

US tanks on a religious compound. Do you trust your military after they helped Pelosi lock down Washington, D.C.?

Just like in Waco, the military took part. Not one soldier, sailor and or Marine stood up and not let alone stood up and stopped it. Just something to think about when the notion of the US military is going to save you creeps into your head. They will follow orders as always. Just ask the bonus army.

Another thing about the bonus army thing. A few years later MacArthur was toted a hero after murdering a citizens and taking part in an constitutionally illegal act. How quickly we forget or choose to forget.

No I did not forget Ruby Ridge and Waco and those involved in those murders.

Or the Murrah Bldg..

The military has written a lot of the current agenda that the illegal regime is using to kill and maim its citizens. Treason is their creed, we have exhausted every constitutional, vote, judicial right. We are now at the jumping off point, I hope like has been said, that they pass all the gun laws they propose, just do it.

yep. Bring it. A patient’s son is in ranger battalion. She asked him if he was ordered to fire on americans would he do it. He said if his boss said to do it he would have to. She said NO YOU DO NOT!

Pray for the slaughtered Davidians

And the CS canisters were the incendiaries which started the conflagration, intentionally allowed to catastrophically burn on. Much has been written and said that federal attackers allowed the fire to burn, as they thought it would force out the soon to be murdered “citizens,” long before it was too late.

L Garou
Reply to  Pray for the slaughtered Davidians

There was not a stash of munitions in the compond. Proof? I am so glad you asked. Flashback: the alphabet men were walking all over the smouldering cinders. Not a drop of water was used to “cool” things off first.

So glad you asked.

As the people were running out the back, gun fire burst can be seen through the smoke and it wasn’t the Davidians shooting.

Pray for the slaughtered Davidians
Reply to  CTR Wolfman

“As the people were running out the back, gun fire burst can be seen through the smoke and it wasn’t the Davidians shooting.” And revealed in video, recorded at length by a fedgov ‘eye in the sky’ (Model 1993).

tom finley
Reply to  Pray for the slaughtered Davidians

Yea I had a copy of that video.

It was actually a team of Delta force positioned at the back door with a belt fed machine gun killing the people trying to get out of the fire. This was captured on IR camera by aircraft flying over head. The court refused to order the Feds to release the video. However, SAS was also flying overhead. The lawyers for the victims were able to get the SAS to release their copy of the video. On the video the Delta team can be seen murdering the victims. Why was SAS there? A convenient training lesson? All governments are scum.

Pray for the slaughtered Davidians
Reply to  Citizen Joe

That wasn’t SFOD-D, they were standard, dime a dozen, fedgov jackboot murders. SFOD-D kicks, breaks, destroys, kills & murders on a level infinitely beyond that thuggish pillaging. Moreover, it was April of 93′, and SFOD-D was still wholly preoccupied with the breakup of the Stalinist dictatorship, securing “loose” nukes, and doing their best to sump-pump the overflowing shitstorm of instability caused by “Mother Russia”. Not only didn’t SFOD-D have the time, they wouldn’t have touched that ghetto thug fest.

Ace
Reply to  Pray for the slaughtered Davidians

What “shitstorm of instability” did “Mother Russia” cause?

I remember Waco and the MSM coverage of Janet Reno (then AG for Clinton) and how skewed the information was at the time. It has taken years to understand what offense was committed that justified the government killing everyone, including children. From what I have been able to discover, their greatest offense was that they were teaching people how to become “nationalists”. They were an early “state assembly movement”. Waco should have become a rallying cry, but it didn’t. Waco should have been a crime so unforgiveable that Reno & Clinton would never stand in public again without being called on it, but that didn’t happen. Maybe now is the time for the true story behind the Waco Massacre to be remembered and told. May the souls of these poor Americans rest in Jesus.

Pray for the slaughtered Davidians
Reply to  gail jansen

The factual reality of that murderous slaughter has been told since Day One (1993).

Finally watched the mini-series, Waco, a couple weeks ago. I’d avoided it because I thought it would be over-the-top justification for what the Feds did. Surprise, surprise! While not leaving the Davidians in an exactly holier-than-thou position, it did show the evil intent of the Feds and failed to show why such force would have been necessary or even what ‘laws’ were broken by the Davidians. The PR lies by the Feds were also highlighted.
The one thing I learned from the show, assuming it was accurate and not ‘Hollywood’, was that Congress was threatening to defund the ATF as a result of the Ruby Ridge debacle and the ATF needed a high profile ‘victory’ for political reasons. That would explain why they didn’t just arrest Koresh on his daily jog, but came in with military force. Once their effort went tits-up, the FBI took over and the HRT goons did the dirty work. Even with this fiasco, the ATF only grew in strength. No accountability, ever, for Federal misdeeds.
Americans didn’t stand up then. Don’t expect them to stand up now. Pray for the remnant of Heritage Americans, that we can rebuild when this foolishness is over.

Remember, although the ATF got this started, it was the FeeBI in charge when the final murders took place. Reno authorized the tank assault because the poor lil FeeBI agents were tired and dirty after being in the field for a couple weeks.

Tragedy of the Commons

What good is the Posse Comitatus Act when it can be waivered when
the scum feel like it. Vince Foster was horrified by Waco and was in
the process of documenting the massacre when he was abducted and
killed and all the documents on Waco stolen. Two deputy sheriff’s who
were against what was happening at the Waco compound were shot in
the back while standing in front of the Waco compound by the fbi
snipers situated on a ridge behind the Waco compound. There’s those
snipers again. And, of course, the real terrorists were never punished.

If I remember right, the best documentary about Waco is called “Waco the Rules of Engagement”. I actually spoke with one of the defense lawyers back then. The Feds used the tanks to crush the exits. Except one at the back, away from the news cameras. The Feds denied using canisters of gas. Then they admitted they used a few. Under cross examination they admitted to using about 200 canisters. They knew the vapors would be flammable. The women and children were in the storm shelter underground. Trapped. Right were the feds wanted them. They were overcome by the gas. Unable to get out because the tanks crushed the exit. Intentionally. And they used the tanks to crush the entire storm shelter. They ain’t getting my guns.

These days you have to watch the doctors too. Several months before Waco
doctors at the NCI, sabotaged a clinical trial killing all their patents, in an effort to steal an effective brain cancer treatment! My wife was one of the victims!

With xxxx 19 even most of the doctors are also following orders, that result in their patents deaths! You can’t trust the government or big systems.

Governments, are always the greatest threat to the lives of its citizens, directly or indirectly! With big business effectively in control of the government, you are on your own, trust no one other than a few friends! TINVOWOOT

The Feds demonize those they want to kill. They accused the Davidians of being White Supremists. Really? The number two guy just below Koresh was a Black lawyer. Some of the members on scene were Caribbean Blacks. The feds said the Davidians were operating a meth lab. None found. I read the search warrant. It was for an unlawful lower receiver for an AK47. Problem. The AK47 does not have a lower receiver. It does not have an upper receiver. It has what’s called a uni receiver. And that last nonsense was from a professional ATF agent? The ATF had a man inside the building. He came out and told the ATF the Davidians knew they were coming. But they went ahead with the raid anyway. Because the warrant expired the next day. They got away with this. And they got away with the Oklahoma City bombing. And they got away with at least letting 9/11 happen. Maybe worse. Probably worse. They ain’t getting my guns.

The U.S. Federal government is totally corrupt and evil.
It MUST be overthrown and the Constitution re-instated in complete compliance with the intent of the founders that wrote it.

Pray for the slaughtered Davidians

The Constitutional Republic of America was already overthrown, at the earliest, 109 years ago and still hasn’t been accounted for. 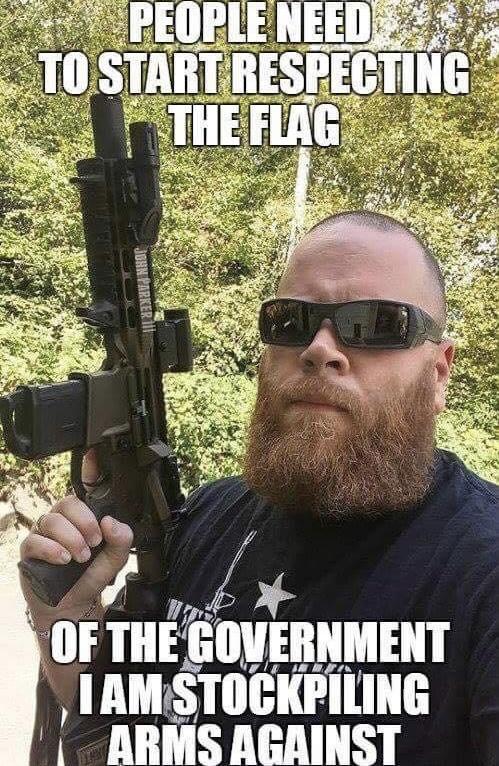 CSX gas, used in Vietnam against the Vietcong, highly flammable more than real tear gas, used against those peaceful people, pumped into the building for hours before belching fire from the tanks. Not in a “compound”, but in a “community”. Word manipulation. Armies have compounds, citizens have homes.
A suppressed 911 call from inside after the first confrontation, voice of David Koresh himself, pleading “Why did you come in shooting? We would have let you in peacefully!”
Local police had served warrants before on THREE OCCASIONS, when the local sheriff served warrants based on anonymous calls that they had illegal guns. The sheriff found zero illegal guns on the property those times.
After the initial ATF botched raid, and failure to serve the warrant (which was a personal warrant for David Koresh himself, not the community home) when Koresh did his daily run outside the property, the sheriff blasted the agency, saying “Now they’ll have to burn the place down to the ground!”
It was reported later that all the people they tried in court had all charges dismissed by the jury, except orders came down from high-level feds that they had to charge them with something, so they did.
And later one, survivors wanted to rebuild a church on the grounds, and got a few strange people harassing them. Can’t have a focus for publicity that exposes the massacre.