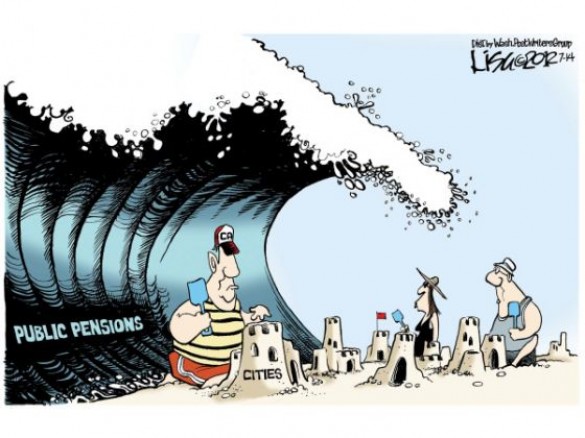 Another example of Democrat greed and ignorance coming out of Illinois. The Illinois’ public pension system is almost $100 billion in debt. Union/state pensions are killing the economy and stealing from people who work in the private (real) sector. As Illinois (and soon Washington) is realizing, there is no way out from under the tsunami that is about to hit.

Starting Over in the Land of Lincoln

Conservatives are calling for a total transformation of Illinois’ public pension system in the wake of Democratic Gov. Pat Quinn’s failure to reform the program, which is nearly $100 billion in debt.

Bob Williams, president of State Budget Solutions (SBS), says Illinois will be the first of many states to fail if something is not done to quell rising retirement costs for state employees and teachers.

SBS, a conservative nonprofit, has studied the fiscal problems of all 50 states and sees one common denominator to curbing pension shortfalls: Converting defined-benefit retirement plans in which employees receive set benefits regardless of a state’s financial health to the defined-contribution plans common in the private sector.

“The only solution is a 401(k)-type, defined-contribution system,” Williams said. “These defined-benefit systems are underfunded woefully, and unfortunately, too many states aren’t waking up to reality.”

This entry was posted in Editorial, Financial and tagged Bankrupt, Illinois, Pension, Public. Bookmark the permalink.